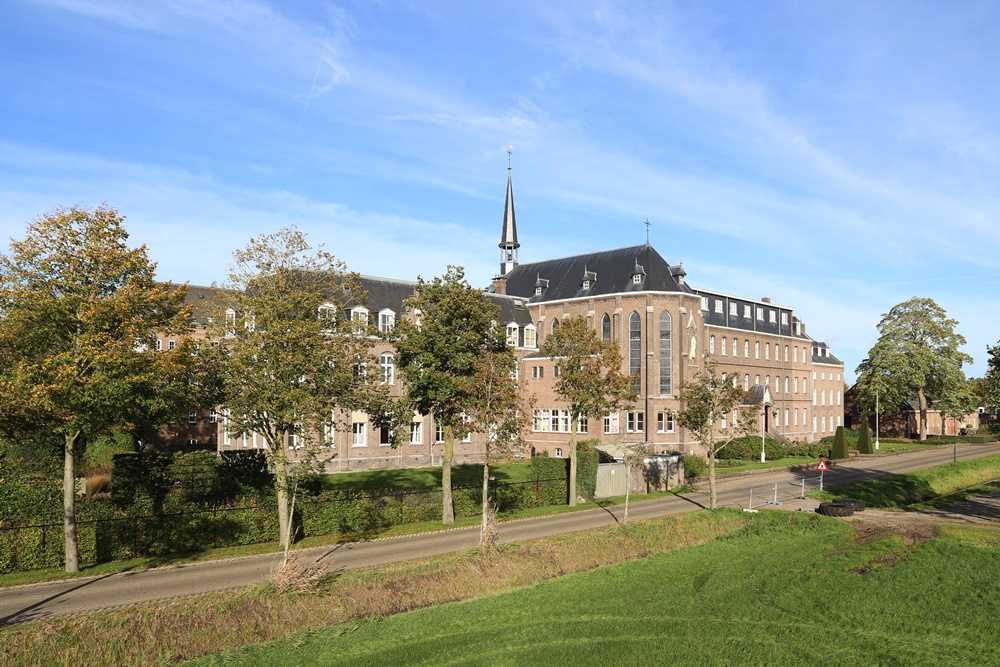 The monastery at Aarles Broek, where the Missionable Sisters of the Precious Blood have been able to follow the mission sister training for more than 113 years and have a safe home.

During the First World War (1914-1918), the novitiate's dormitory and guest section were set up for the care of war victims (regardless of their nationality or religion). An enormous Red Cross flag was applied to the roof of the monastery so that it could be seen from far and wide that the Sisters were ready to receive the war wounded.

Even Prince Hendrik of Mecklenburg-Schwerin (Queen Wilhelmina's husband) visited Aarles Broek to inspect this wounded room and was very enthusiastic about the preparations made by the Sisters. Prince Hendrik was president of the Red Cross. War victims never came; more than 170 sick and exhausted Belgian refugees did come and were nursed with love by the Sisters. In the meantime, dozens of Sisters had left for the front line to provide nursing assistance there.

The Second World War broke out in the Netherlands on 10 May 1940. Because many Sisters were of German descent, they soon became easy targets for angry tongues, and Mother Superior Tirpitz was deeply concerned about the safety of the Sisters. There was fear that the Germans would appropriate the monastery as an emergency hospital.

Despite this, people in need were welcome at all times in the Monastery; Jewish people in hiding, political people in hiding, members of the resistance and English and American pilots who had been shot down were taken care of if they were injured. The Gestapo came to check regularly and the Sisters had to stay in the courtyard for hours. These visits were extra dangerous because Titus Brandsma, a priest, professor and resistance hero regularly visited the monastery. Titus Brandsma was high on the list of wanted persons of the Gestapo. He was finally arrested in 1942 and killed in Dachau concentration camp.

In September 1944, the German Wehrmacht was planning to blow up the bridges in Aarle-Rixtel and Beek and Donk to delay the advancing Allies of Operation Market Garden, and the residents were evacuated and housed in the monastery and on other farms in the Biezen on the Aarles Broek. On 12 September 1944, the bridges went up, but the surrounding damage was so limited that the residents could go home again.

But even when wounded and hungry German soldiers knocked on the door of the Sisters during the run-up to the liberation days around Aarle-Rixtel and Beek and Donk, they were received, cared for and fed.

After Aarle-Rixtel was freed on 25 September, a detachment of 60 British soldiers and 10 officers moved into the monastery in October.

The villages that now form Laarbeek had been liberated during Operation Market Garden since September and the Battle of Overloon was on its last day on October 18, 1944. But in the meantime, something happened at the monastery in Aarles Broek that would have consequences for a long time to come. On this day, 20 men of the Interior Forces (B.S.) invaded the monastery and conducted a lengthy and heavy interrogation with the Superior General Sister Ebba Tirpitz.

The Sisters were accused of hiding German soldiers, espionage for the Germans and strategic information was also passed on to the German occupiers via a secret channel. For two hours they searched the monastery but couldn't find anything suspicious. The only thing they found was the young Jewish woman Maria Arnovicz hidden in a special room. "So," said Sister Tirpitz, "that is one of the many we have hidden here during the war!" After these words, the Domestic Armed Forces soon left, but the damage had already been done and the Sisters had suffered a great deal of suffering from these false accusations, purely because they were German.

False gossip is spreading faster than fire, and soon the rumor started about the German Sisters in Aarle-Rixtel who were 'wrong' during the war. The rumors persisted and spread to the distant surroundings, until an anonymous person hung a letter on the town hall clearly stating that the Sisters were being completely wrongly accused and names of the many people in hiding and people who were short-lived found a safe home in the war years (including the family of the mayor of Gemert and allied pilots) The Sisters themselves never, in all modesty, mentioned the exact names of those who offered them help and of course this was not written down anywhere.

The letter was even taken over by various newspapers and so again interference came to the fore by the Regiment of the Shock Troops, the British headquarters and the headquarters of the Dutch Armed Forces, all of which praised the Sisters. And the British Headquarters took a very clear position that anyone who would still raise suspicions against the Sisters would be strongly condemned.

During a visit to the Aarles Broek, Queen Wilhelmina clearly expressed her praise for the efforts of the Sisters during the war years, and so the false rumors finally came to an end. The British and American Allies gave the Sisters a certificate for their courage, hospitality and help.