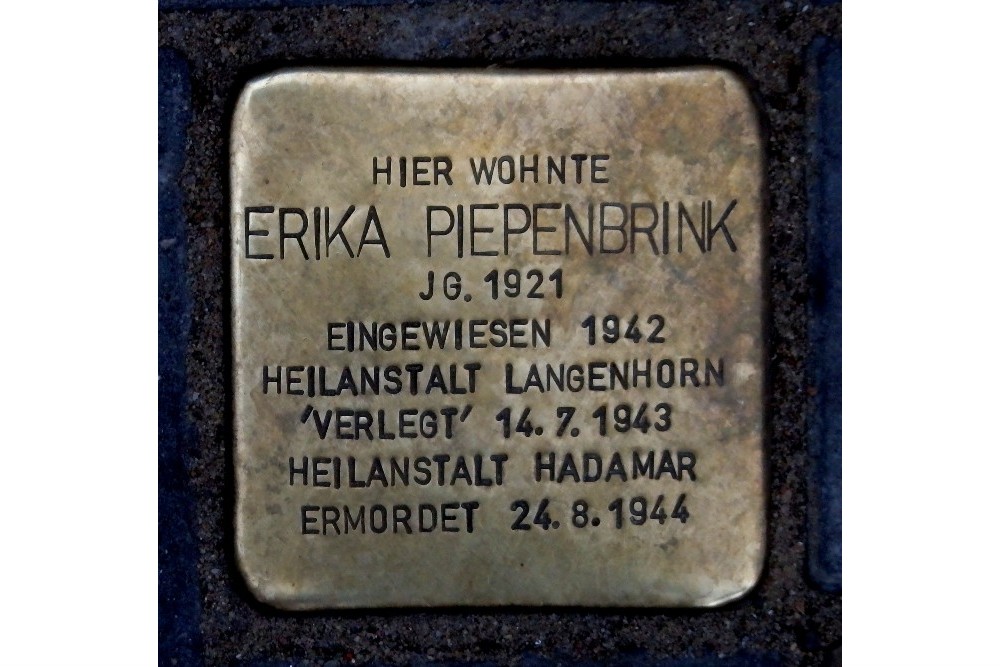 After leaving school, Erika Piepenbrink worked from 1937 to January 1942 in a variety of housekeeping and factory jobs, but she lost her jobs frequently because of her unusual behavior. In 1937 at age 16 she was involuntarily sterilized in the Harburg hospital. Five years later she was admitted to the Oberaltenallee Care Home, and in March 1942 she was transferred to Langenhorn, diagnosed as feeble-minded. Her parents were told she might be there for a year. However, in August the administration was acting to incapacitate her, telling her parents not to take on any obligations towards her. She was not allowed to leave for the Christmas holidays. And she was deemed to have an asocial illness. In July 1943 she was transferred to Hadamar State Hospital. In response to their inquiries, her parents were told that Erika was physically fine and should not be outside during wartime. An entry in the records for 23 August 1944 noted that Erika had pneumonia with high fever and a weak heart. She was dead the next day.

Hadamar is known for its killing center where 14,500 people with disabilities were murdered between January 1941 and March 1945. From August 1942 to the end, 4,500 patients  including Erika Piepenbrink -- were murdered by lethal injection, failure to treat an illness, or starvation.

Bernhard Schreiber joined the German Communist Party (KPD) as a young man. On 25 July 1934, he was arrested for his connection with illegal newspapers. Nine months later he was sentenced to 1½ years in prison. He served his time in the Neumünster Penitentiary. After returning to Harburg, he worked as a barber and married Bertha Schulz (born in 1903). Because of his imprisonment, he was not deemed suitable to serve in the military  until he was needed after the devastating winter battles in Russia. In 1942, he was drafted into the Probation Battalion 999 [Bewährungsbataillon 999] or  as on the stolperstein -- the Punishment Battalion 999 [ Strafbataillon 999]. He and the other convicted criminal soldiers were posted in particularly dangerous situations. In 1944, he did not return to his unit after a battle in the Greece-Albanian border area and was considered missing. In 1958, Bernhard Schreiber was declared dead.