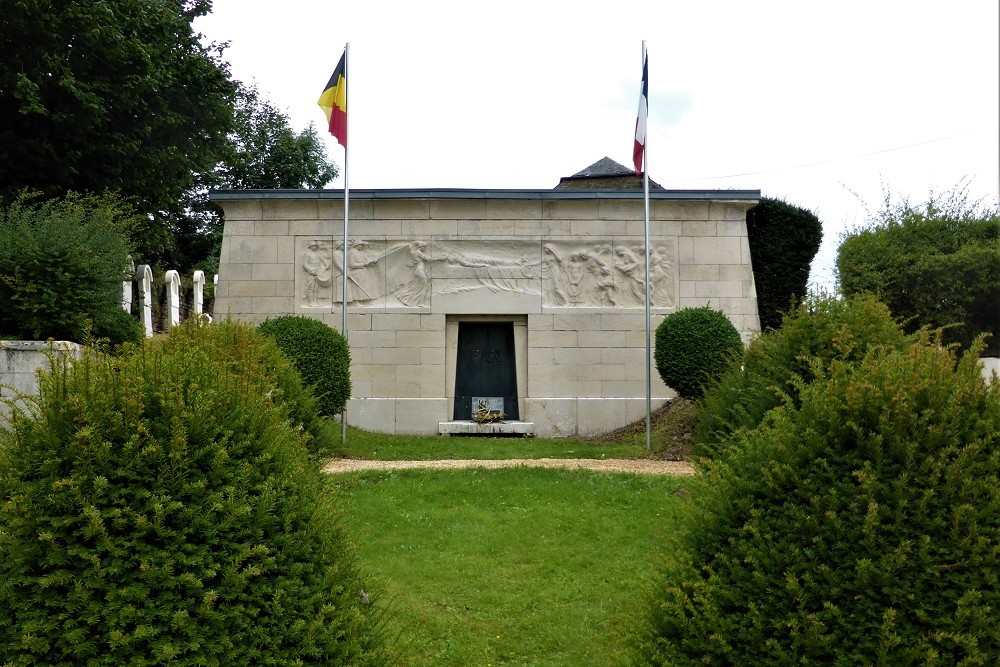 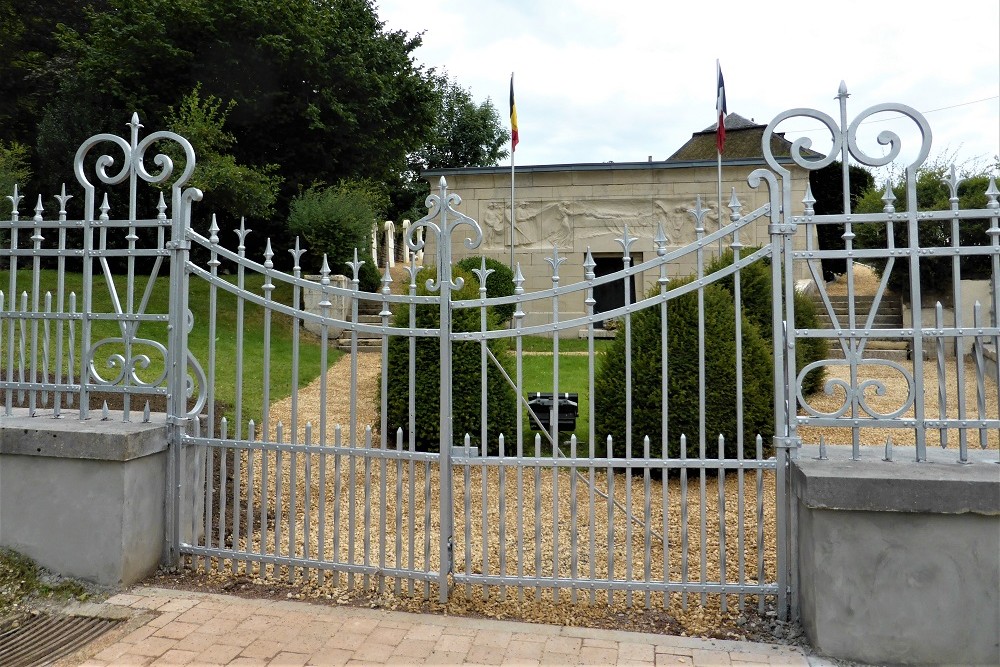 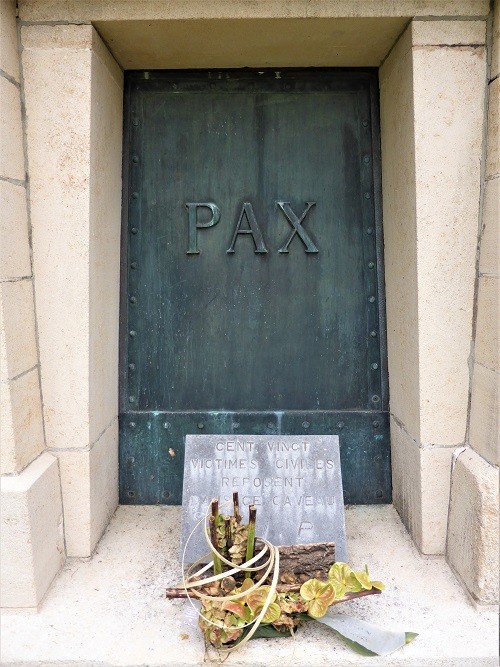 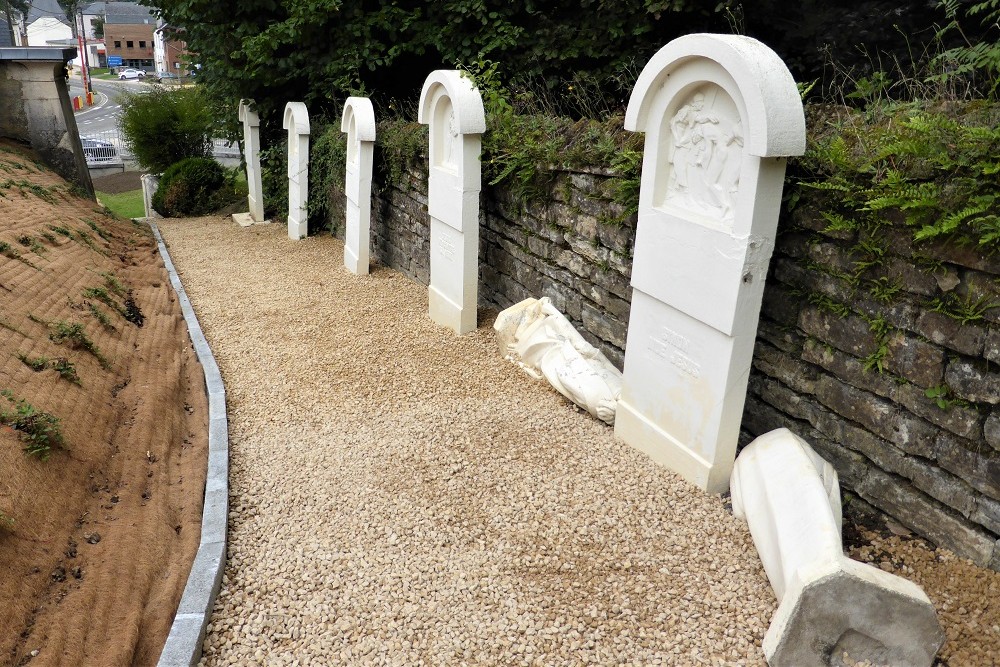 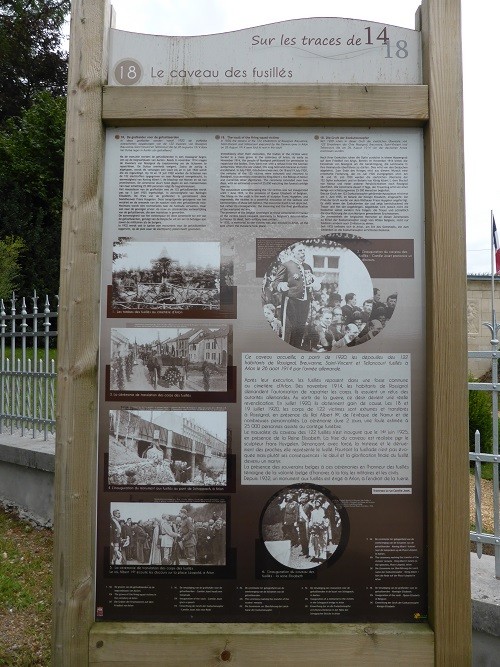 The mausoleum for the executed was designed by architect Adrien Blomme, the frieze was sculpted by Frans Huygelen.

In front of the entrance door "PAX" (Peace) of the mausoleum is a stone slab:
"One hundred and twenty
civilian casualties
rest
in this mausoleum
R.I.P. "

To the right of the building are 2 stone slabs with the 125 names of the victims:
"Remember the 125 victims of 1914"
On the other side of the street there is another memorial plaque:
"Swear never to forget the glorious martyrs of August 26, 1914"

During the German invasion an important battle took place between French and German troops in Rossignol. Despite their victory, the Germans were exasperated: they lost time and men in their march towards Paris. They attacked the people of Rossignol, most of the men were taken prisoner. On Wednesday, August 26, 1914, 126 residents of Rossignol, Breuvanne and Saint Vincent, who had been arrested a few days before, were randomly murdered by the Germans, on the orders of General Von Tessmar, in Arlon station at the Schoppach bridge, where a livestock transport had taken them.
The bodies were buried carelessly in a communal well in the municipal cemetery of Arlon. Already in November 1914, the inhabitants of Rossignol asked for permission to repatriate the bodies, but the Germans refused.
The families of the victims continued to push for the repatriation of their loved ones to their home village, and in July 1920 their demand was granted.
On July 18 and 19, 1920, the bodies of 122 victims were exhumed and transferred to Rossignol in the presence of His Majesty King Albert I, the Bishop of Namur and several prominent figures. The king went to Arlon to the departure of the funeral procession, which after two days passed Stockem, Fouches, Vance, Etalle, (night of mourning) Sainte-Marie and Tintigny, reached Rossignol. An estimated 25,000 people followed the funeral procession. The mausoleum was officially inaugurated on June 1, 1925 in the presence of Queen Elisabeth.