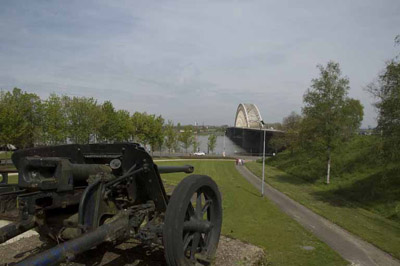 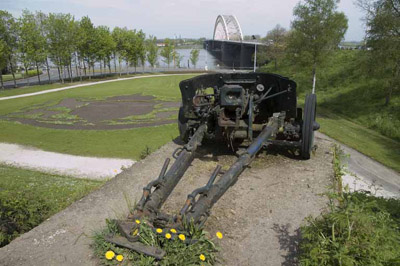 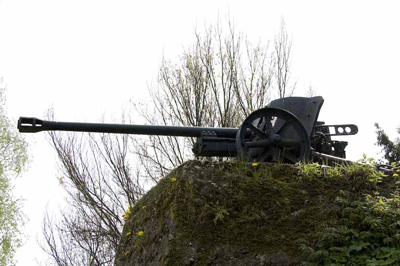 This is one of the remainders in the area around the bridge across the river Waal at Nijmegen which reminds of the terrible battle that has been fought there. It concerns a German gun of the type 50mm PAK 38 (Panzer Abwehr Kanone) and has been placed on a slope in the Hunnerpark. The gun can be visited also from the road the N325. This type of gun belongs to the standard category of the German anti-tank armament and some 10.000 of those were manufactured. The gun was involved in the battle around the Hunnerpark and the Keizer Lodewijksplein in September 1944.

During operation Market Garden in September 1944 the American paratroopers and the British ground forces arrived at the bridge and were faced with the resistance of the 1. Kompagnie SS-Panzer-Pionier-Abteilung 10 under the command of the SS-Untersturmführer Werner Baumgärtel and by the 2. Bataillon SS-Panzergrenadier Regiment 19 under the command of SS-Hauptsurmführer Karl-Heinz Euling.

On September 18th, 1944 the so called Kampfgruppe Euling crossed the river Rhine from the direction of Arnhem at the Huissen and Pannerden to dig in in the Hunnerpark.
When the 82nd Airborne Division crossed the river Waal at the power station, the bridge could be attacked from both the north as well as from the southern side. This made the Germans cease the battle at the southern side of the bridge.
Of the 500 men strong dug in Kampfgruppe Euling over 300 died. About 60 others were made prisoners of war, the remainder escaped. 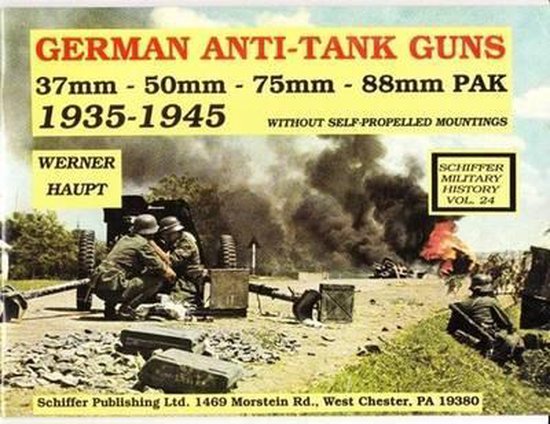