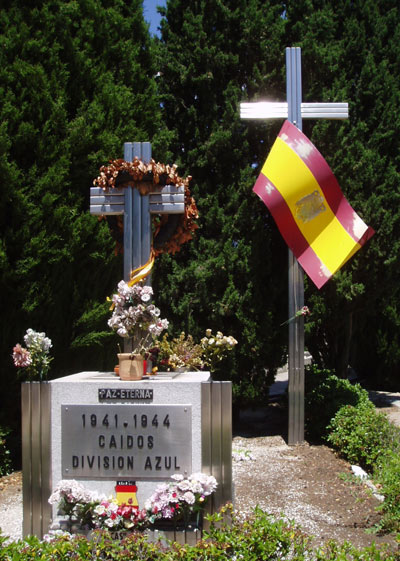 This memorial commemorates the fallen Spanish soldiers at the Eastern Front of the División Azul. This German 250th Infantry Division, which consisted of Spanish volunteers who fought against the Communist Russians on the German side and in German uniforms. The division was active from June 1941 and consisted of over 18,000 volunteers. These volunteers were mostly former soldiers and officers who had fought in the Spanish Civil War. Before their fight at the Eastern Front, the soldiers were trained in Germany, here they learned the German techniques. In 1943, Franco send reinforcements to the eastern front, because there were no more volunteers, Spanish conscripts were sent to the eastern front. The number of soldiers grew to 45,000. That same year, Franco, at the insistence of the Allies made an end to the division, most of the soldiers returned to Spain. Those who did not give up the fight, were employed in the new Legion-Azul and later in other parts of the German army. In total there were about 5,000 casualties in the División Azul.

In Spain more monuments in honor of the Division Azul where erected, a number of these monuments are gone. To our knowledge this is the only remaining monument in Spain. In Russia is also a monument to commemorate the División Azul.