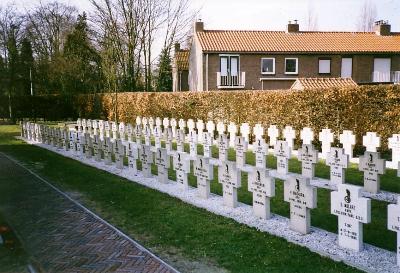 Ginneken is a southern district of Breda and during the battle of Breda there were heavy fights between the Polish 9th Infantry Battalion and the German defenders. The Polish soldiers who died in this battle were buried on de Roman Catholic Cemetery of Ginneken. Until the end of the Second World War almost all killed soldiers of the Polish 9th Infantry Battalion were buried here.

After the war the residents of Ginneken refused to replace the graves tot the Polish War Cemetery in Breda and still they commemorate every year on the 29th of October, the liberation-day of Ginneken, the fallen. There are 80 Polish soldiers buried here.