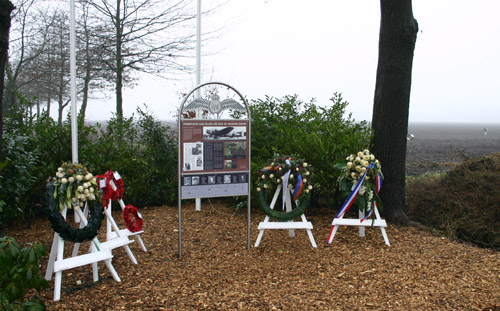 This memorial commemorates the crash of the Lancaster OL-Y NE 165.

Part of the text on the monument:

Wednesday, February 21, 1945 at 17:07 departed from Coningsby, the Lancaster OL-Y NE 165 to participate in a Pathfinder Mission on Gravenhorst, Germany. Close to Gravenhorst lies namely Mittelland, a parting of the Dortmund-Ems Canal and a strategically vital waterway for Nazi Germany. The intention was to break the dikes of the channel. 177 planes of which 165 Lancasters, would participate in this attack.

Lancaster OL-Y NE 165 crashed at 20:45 after it was hit by the a German night-fighter. On board were eight crew members. Only Flying Officer E.H. Eddie Hansen survived the crash.

The crew members who did not survive the crash are buried in the Commonwealth War Cemetery Mierlo.