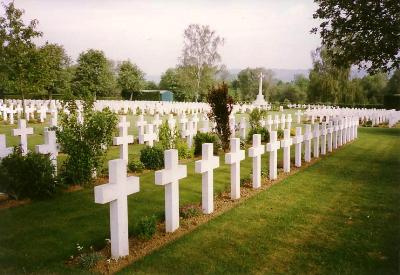 Choloy War Cemetery was created for the re-burial of casualties recovered from isolated sites, communal cemeteries and small churchyards in north-eastern France where permanent maintenance of the graves was not possible.

Those who lie in Choloy War Cemetery are mostly airmen, but there are also soldiers belonging to the forces of the United Kingdom who died in the Saar region during the first few months of the war, i.e. up to May 1940, or as prisoners of war.

There is now 1 Commonwealth burial of the 1914-1918 war and 461 of the Second World War commemorated in this site. Of these, 23 of the 1939-1945 burials are unidentified. In addition there are 7 Foreign National burials, 2 of which are unidentified and 334 non world war burials here. The non war graves bear crosses instead of the standard Commonwealth headstones.