Recommendation:
"On the night of 30/31 May, 1940, he was detailed to attack an important bridge. Although being heavily fired at, he carried out three runs at 1000 feet.

On the night 23/24 May, 1940, he was detailed to attack a cross roads. Owing to cloud he could not see the ground. He therefore waited over his target for an hour and a half for the moon to come out and enable him to carry out his task more accurately.

On the night 25/26 May, 1940, he was detailed to attack a certain cross roads. Finding the weather over his target to be too bad to enable him to distinguish his point of aim, he flew west, saw finer weather coming, so waited one and a half hours in the neighbourhood of his target in order to ensure accurate results.

He has now completed 22 operational flights. Both as a second pilot, and since he has been a Captain, he has shown a tenacity of purpose, a courage and thoroughness of planning and execution which is beyond praise. As Captain of aircraft he has not only led his crew in the air but has applied himself to their training on the ground with the same thoroughness that has characterized his work in the air."

Citation:
"This Officer has completed a further 27 operational sorties since being awarded the Distinguished Flying Cross. He has continued to show great courage, resourcefulness and unfailing devotion to duty.

As a Flight Commander, his powers of leadership, enthusiasm and ability to carry out his job under any conditions, have been an inspiration to all whom he has come in contact."

Recommendation:
"This Officer led his Squadron on a bombing raid on the German battleship TIRPITZ on the 27th/28th April 1942 in addition to having taken part in a similar attack the previous month.

The enemy had concentrated heavy defences over the target area and this was well known to this officer, but despite this fact he came down to about 200 feet and flew through the fiercest of defences to press home his attack, releasing his bombs on the ship or at any rate close to the ship.

In addition to his own magnificent example of courage, his superb leadership, sense of duty, enthusiasm, cheerfulness and determination which he exhibited at all times were largely responsible for the gallant way in which the other crews of his Squadron went in to the attack.

For this I very strongly recommend that he be awarded immediately the First Bar to his Distinguished Flying cross. 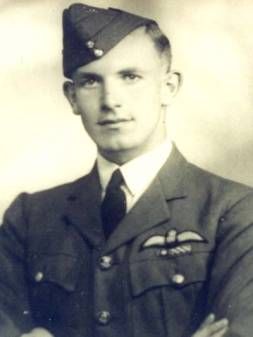