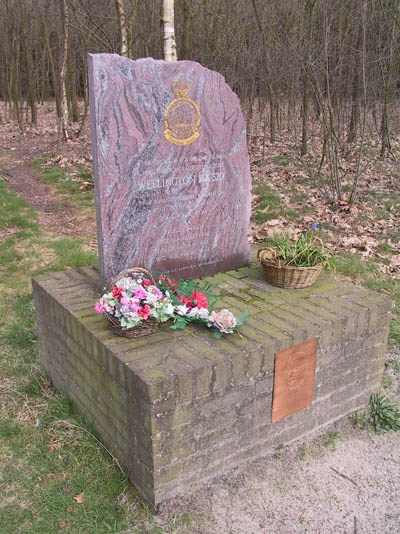 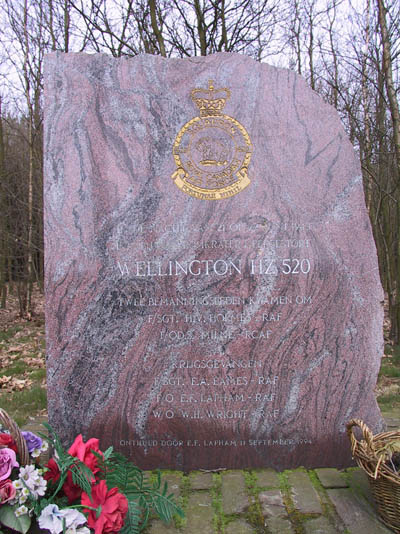 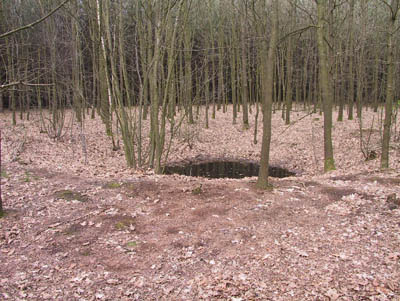 On June 22nd 1943 at 01:20 a bomber crashed alongside the Fressevenweg in Bergeijk in the Dutch province of Noord Brabant. The Wellington HZ520 of 429 Squadron was downed by the German night fighter Leutnant Werner Baake. The crashed aircraft took part in a raid on the German city of Krefeld.
That same night Hauptmann Baake of Nachtgeschwader 1./NJG1 also claimed a Halifax which crashed in the vicinity of the village of Uden . Werner Baake received the "Ritterkreuz" (Knights cross) on 27 July, 1944, for 41 downed allied aircraft during World War Two.

The monument consists of a pedestal of brickwork with a polished granite stone on top with an engraved text which may be translated as follows:
In the night of 21 to 22 June, 1943, near this crater WELLINGTON HZ520 has crashed.
Two crew members were killed
F/Sgt H.V. Holmes  RAF
F/O D. S. Milne - RCAF
Taken prisoner of war
F/Sgt E.A.Eams  RAF
F/O E.F. Lapham  RAF
W/O W.H. Wright  RAF
Unveiled by E.F. Lapham on September 11th, 1994.

Ten meters behind the monument you will find the crater.

The two crew members that were killed received their last resting place on the British war cemetery in Woensel (in the municipality of Eindhoven). On the front side of the brickwork pedestal there is a copper engraving with the picture of F/O Lapham.

Back in time: Irish Guards in Aalst - Aalst