Information Plaque for the Feathered Injun 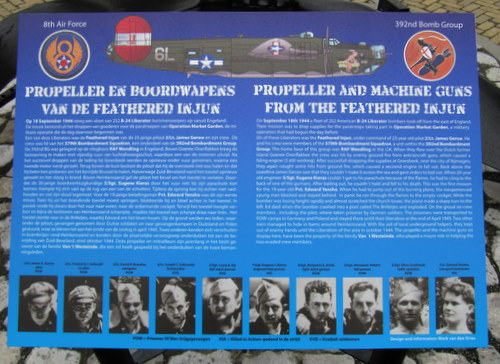 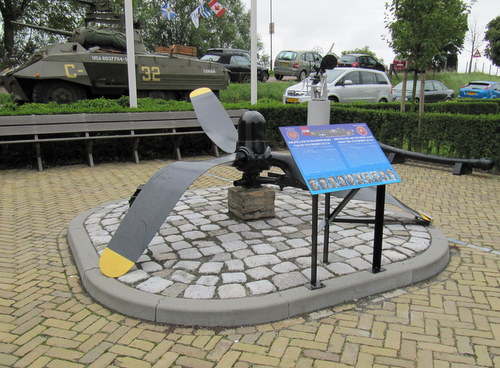 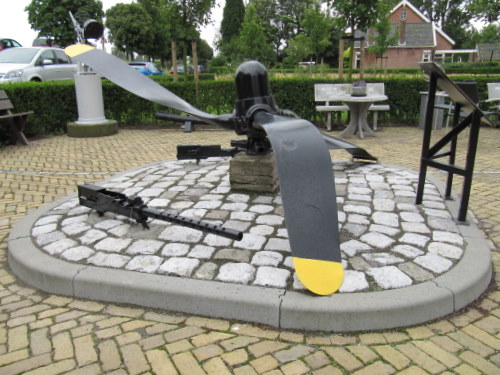 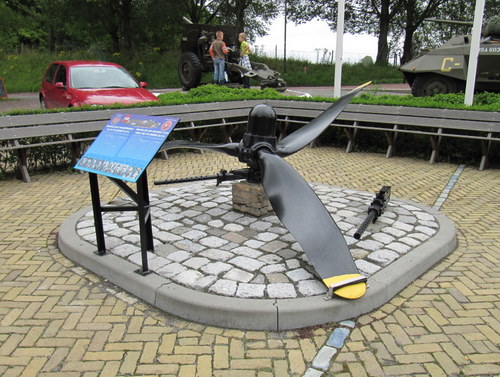 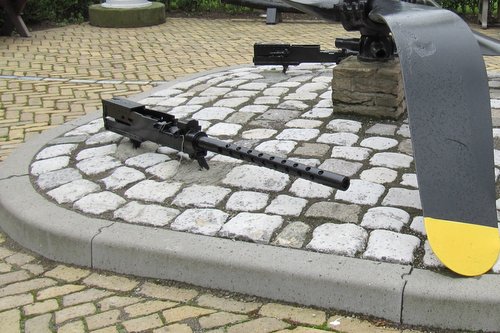 Text on the information plaque:
Propeller and machine guns of the Feathered Injun
On September 18th 1944 a fleet of 252 American B-24 Liberator bombers took off from the east of England. Their mission was to drop supplies for the paratroops taking part in Oeration Market Garden, a militairy operation that had begun the day before. One of these Liberators was the Feathered Injun, under command of 23-years old pilot 2/Lt. James Gerow. He and his crew were members of the 579th Bombardment Squadron, a unit within the 392nd
Bombardment Group. The home base of this group was RAF Wendling in the U.K. When they flew over the Dutch former island Goeree-Overflakkee the crew was hit by enemy ground fire from anti/aircraft guns, which caused a faling engine (3 still working). After succesfull dropping the suplies at Groesbeek, near the city of Nijmegen, they again caught some hits from ground fire, which caused a second engine to fall out. Back above the coastline James Gerow saw they couldnt make it across the sea and gave orders to bail out. When 20-year old engineer S/Sgt. Eugene Kieras couldnt get to his parachute because the flames, he had to cling to the back of one of the gunners. After bailing out, he couldnt hold and fell to his death. This was the first mission for the 19-years old Pvt. Edward Yensho. When he had to jump out of the burning plane, the inexperienced ypung man blocked and stayed behind. In panic he ran through the flames to the empty cockpit. While the bomber was losing height rapidly and almost scratched the church tower, the plane made a sharp turn to the left. Ed died when the bomber crashed into a pool called The Brilltjes and exploded. On the ground six crew members, including the pilot, were taken prisoner by German soldiers. The prisoners were transported to POW-camps in Germany and Poland and stayed there untill their liberation at the end of April 1945. Two other men managed to hide in barns around Heinkenszand. With the aid of local underground helpers, they kept out of enemy hands until the Liberation of the area in October 1944. The propeller and the machine guns on display here, have been the property of the family Van t Westeinde, who played a mayor role in helping the two evaded crew members.