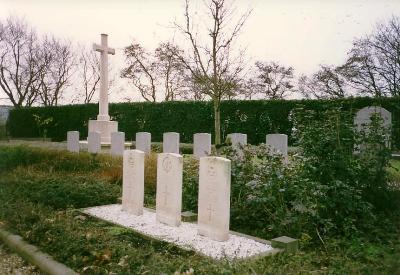 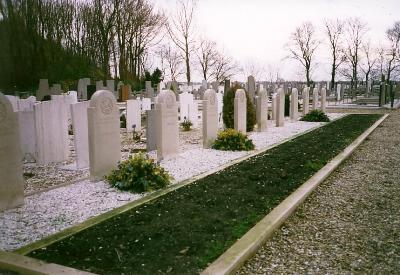 's Gravenzande General Cemetery contains 112 Commonwealth burials of the First World War, 97 of them are unidentified and many of them sailors and marines killed on 22 September 1914.

There are also three burials of the Second World War. These are the graves of Sergeant George Beardwood, Lance Corporal George Stewart and an unknown Flying Officer.

Sergeant George Beardwood was killed on 10 May 1940 when his Bristol Blenheim L8828 of the 40th Squadron crashed during a mission to bomb the German held airfield of Ypenburg. The other two crewmembers were also killed. Flying Officer Percival Rowan is buried at Rozenburg and Corporal Temple Clark at Rockanje.

Lance Corporal George Stewart was serving with the 2nd Battalion Irish Guards. The battalion was part of the Harpoon Force, which acted in Hook of Holland between 10 and 14 May 1940. Stewart was killed in the morning of 14 May during a German airraid on the village.

The cemetery also contains a plot with 11 Dutch war graves in a row.