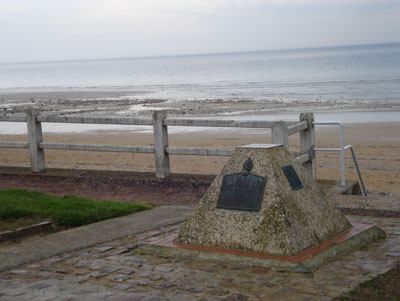 The text on the memorial reads:
This monument was unveiled by General Sir George Cooper GCB MC on the occasion of the granting of the freedom of Lion-sur-mer to the crops of Royal Engineers on 10 June 1989.
It commemorates the part played by 77 Assault Sqaudron RE in the liberation of the town on 6 June 1944 and the continuing links between 77 Armoured Engineer Squadron and Lion-sur-mer.

Operation Overlord also unfolded on "Sword" just like Elders. During the night the German coastal defenses were bombed by the Allied air force. In the morning following the bombing of the Allied navy with their artillery. Later, under German fire, the units came ashore and penetrated through the defenses with tanks, followed by attacks by the 3rd Infantry Division led by Major-General Rennie.

The first units of the South Lancashires liberated the village of Hermanville at 10 am, while the Suffolk Regiment liberated the adjacent village of Colleville. The British could not reach Caen quickly, as had been planned in advance. The long battle for the city started at 11:30 am that same day.

The Allies needed calm seawater to land troops and equipment. To this end, a number of ships were sunk about 2.5 km off the coast of Hermanville under the name "Gooseberries" (code name). 6 merchant ships and 3 old warships were sacrificed for this.