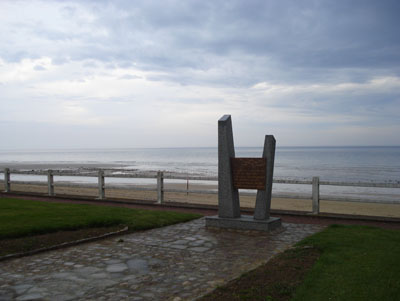 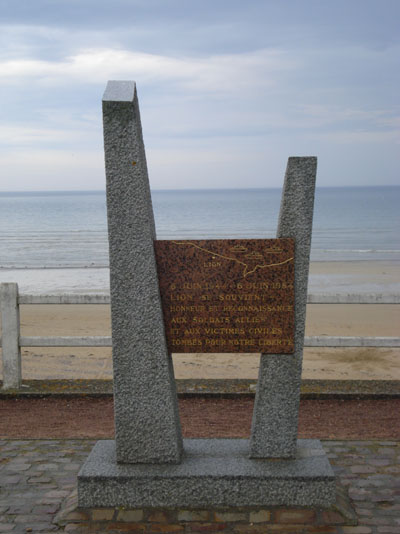 The memorial is located on the Boulevard of Lion-sur-mer.
The text on the memorial:
6 June 1944  6 June 1984
Lion remembers - honour and recognition the Allied soldiers and civilian victims who gave their lives for our freedom.

Operation Overlord also unfolded on "Sword" as elsewhere. In the course of the night the German coastal defenses were bombed by the Allied air force. In the following morning, the Allied Navy continued these bombardments with their artillery. Later, under German fire, the units came ashore and penetrated through the defenses with tanks, followed by attacks by the 3rd Infantry Division led by Major General Rennie.

The first units of the South Lancashires liberated the village of Hermanville at 10 am, while the Suffolk Regiment liberated the adjacent village of Colleville. The British could not reach Caen quickly, as had been planned in advance. The long battle for the city started at 11:30 am that same day.

The Allies needed calm seawater to land troops and equipment. For this purpose, a number of ships were sunk about 2.5 km off the coast of Hermanville under the name "Gooseberries" (code name). 6 merchant ships and 3 old warships were sacrificed for this.