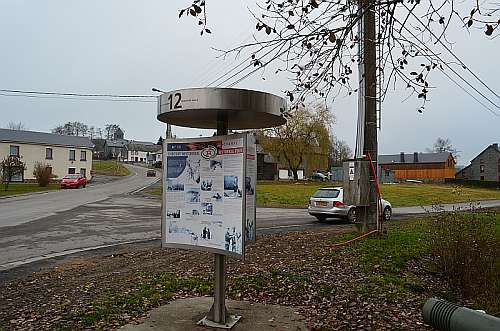 The 502nd regiment of the 101st Airborne of Lieutenant Colonel Steve A. Chappuis is responsible for the defense of the village with, on the left, the 327th floating armor. The headquarters is located in Rolley Castle.

During Christmas night, the German artillery makes itself heard. General Kokott leads the attack on Champs with the 15th Panzergrenadier and the 77th detachment of the 26th Volksgrenadier with the ultimate goal of taking Bastogne.

Tank battles take place on the road between Champs and Hemroulle, while hand-to-hand fighting continues in Champs. All Panzers have been destroyed except one.

The text on the Champs blackboard, written by a German officer, is a poignant testimony to the horror of the fighting.

"May the world never again experience such a Christmas night! Nothing is more terrible than having to die by the guns, far from his children, wife and mother. Robbing a mother of her son, a wife of her husband, children of their father, is that worthy of a man? We receive and accept life to love and respect each other. Undoubtedly, a universal brotherhood will emerge from the ruins, from the blood and death. "

(get.) A German officer

To go to board 13
Turn left and at the crossroads follow the direction Longchamps en Compogne; you stop in the parking lot at the school.