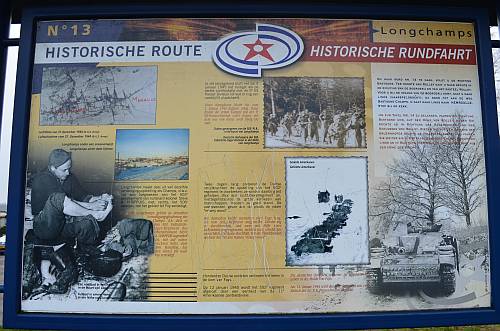 The Historical Route Bastogne is a route surrounding Bastogne with 15 information boards.

Longchamps is part of the same defensive line as Champs, i.e. it was assigned to Lt. Col. Steve A. Chappuis's 502nd Para Regiment, with, on the right, the 506th Battalion, defending the area up to Foy.

It remains quietest in this conflict area until January 3, 1945 when the first confrontation with the 9th SS Panzer Division (or what remains of it) takes place.

For two days the German forces tried to break through the 502nd regiment; they are well assisted in this by an anti-aircraft regiment and, notwithstanding the large losses of men, they hold up well. The survivors give the place the name "misery wood" ...

Hundreds of German soldiers lost their lives in the basin of Fays.

To go to sign 14
Follow the direction Bastogne. At Rolley, turn right in the direction of the farm and Rolley castle. Before you reach the entrance of the farm, turn left (hairpin bend); continue until the Bastogne-Champs road. You turn left to Hemroulle. Stop at the church.