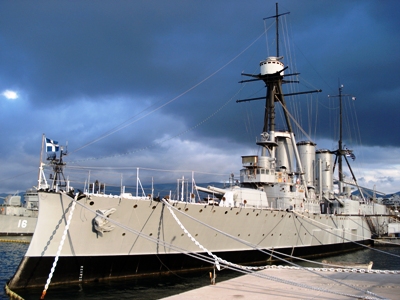 In 1941, the ship's crew disobeyed the orders to scuttle the ship to avoid capture by the Germans and decided to sail to Crete, under the constant threat of German air strikes. Until 1942, it was assigned to convoy escort and patrol duties in the Indian Ocean. After the liberation of Greece it became the fleetship of the Greek fleet.

In 1984 it became a museum ship and it is the only existing armored cruiser.

Be aware: the museum is closed for maintenance untilcirca October 2017.