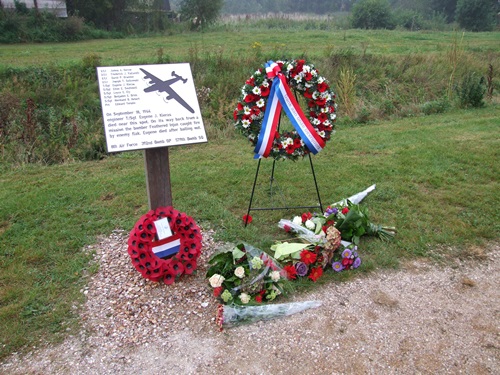 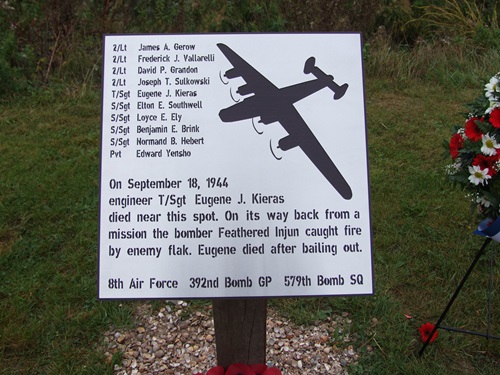 This monument was unveiled on September 20, 2014, in memory of 70 years after the crash. On September 18, 1944 an American B-24 bomber crashed near Heinkenszand. This came back from the dropping of supplies for the 82nd Airborne Division that had landed at Groesbeek the day before as part of Operation Market Garden. Two men died as a result of the crash, six were arrested and transported to POW camps in Germany and Poland, two were able to hide - with the help of the local resistance group "de Groep Griep" - until the liberation.

20-year-old engineer T / Sgt Eugene (Gene) Kieras was in the back of the plane when the bomb bay caught fire from Flak shelling. When the signal was given to leave the plane, he realized he was in danger. His parachute was in front of the plane and a fierce fire raged in the middle. He decided to do a tandem jump and climbed on the back of right wing gunner S / Sgt Benjamin (Ben) Brink. When the parachute opened, Gene could not hold on and fell to his death in the yard of Molenhof farm at 5 Stationsweg in Heinkenszand.
Text on the memorial:

On September 18, 1944 engineer T/Sgt Eugene J. Kieras died near this spot. On its way back from a mission the bomber Feathered Injun caught fire by enemy flak. Eugene died after bailing out.