The "Heeres Flakkampfabzeichen" (Anti-aircraft Medal, Army) was instituted by Generalfeldmarschall von Brauchitsch, July 18th, 1941, in order to decorate Army anti-aircraft crews. Crews of searchlights and listeningposts were also eligible for this decoration. The medal was initially awarded on basis of a system of points, 16 points being required to become eligible for the decoration.
The medal was designed by W.E. Peekhaus from Berlin and has been manufactured by various producers. The medal consists of a wreath of four large oak leaves at each side with an acorn mounted at the stem of each leaf. At the top of the wreath, an eagle is mounted with outspread wings, holding a swastika in its claws. The central motive shows a large and minutely detailed 88mm anti-aircraftgun. The gun is trained upwards to the right with its barrel penetrating the fourth oak leaf of the wreath. The medal measures 2.48" in heigth, 1.77" in width, the wreath measures 0.23" in width. The reverse is flat with a standard hook-and-needle construction. The medal was produced from various metals, specimens made from aluminium being the rarest and specimens made from zinc or a zinc alloy being the most common. In case the medal is marked with a logo or the LDO code of the producer, the logo or number is engraved on the back of the medal. To prevent damage during combat, a textile version to be worn on the combat uniform was produced.
Some well known producers are Gustav Brehmer from Markneukirchen, C.E. Juncker from Berlin, Steinhauser & Lück from Lüdenscheid, Foerster & Barth from Pforzheim and Rudolf Souval from Vienna. The medal was presented in a small box or a standard paper bag with the name of the decoration stamped on it. A standard citation was presented with the decoration and conferment was noted in the Soldbuch. The medal was worn on the lower left breastpocket directly below the Iron Cross 1.
Conferment of the medal was initially based on a system of points, the recipient being required to have gained 16 points before becoming eligible for the medal. The medal could also be awarded to crews of searchlights and listeningposts, in that case the discovery of one enemy plane equalled 1 point. The medal could also be awarded to Flak units of the Waffen-SS. Contrary to Luftwaffe practice, the medal was not to be awarded for actions against ground targets despite the fact that these units repeatedly saw action against ground targets. However, if they had seen repeated action against ground targets, these units did become eligible for the Allgemeines Sturmabzeichen (General Combat Medal).
The following system was set up for guncrews:
-Downing of a hostile aircraft without the help of another gun, 4 points,
-Downing of a hostile aircraft with the help of another gun, 2 points.
In April 1942, this system was substituted by the following requirements:
- 5 succesful anti-aircraft actions against enemy aircraft,
- having seen active service during a minimum of 15 air attacks,
- any action with exceptional conduct in connection with aerial defense,
- the commander of the guncrew became eligible for this decoration as soon as half of his crew had been awarded the medal. 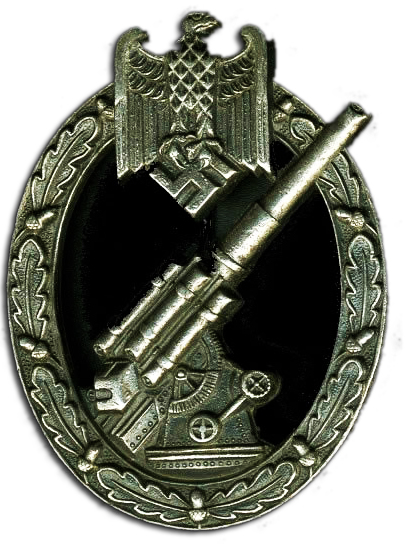