The High Seas Fleet War Badge was instituted on April 30th, 1941 by Grossadmiral (Grand Admiral) Erich Raeder, at that time commander in Chief of the Kriegsmarine (German Navy) in recognition of naval actions, mainly deployed in actions against the British Navy. The designer and principal manufacturer of this award, was Adolf Bock of Berlin. Although the award was instituted in 1941, it could be awarded for actions prior to that date.

The High Seas Fleet War badge was initially made of brass and later of zinc. The award is easily recognizable by its dark silver German battleship coming head on at full steam, plowing through the sea at the center of the badge and producing a bow wave. The battleship is surrounded by a gold oak leaf wreath, with on the top an eagle with its wings spread, clutching a swastika in its claws. The base of the wreath has a ribbon tied in the form of an X with an acorn in the lower and upper V formed by the knot. There are 8 bunches of two oak leaves on either side that make up the wreath. The tip of each leaf has a single acorn, alternatingly on the outside and inside of the wreath. The award is highly detailed, especially the ship's ports, guns and bow wave. From the eagles head, the height of the award measures 57 mm and the width is 44 mm. The width of the wreath is 7 mm and the wingspan of the eagle measures 31 mm. The reverse of the award is concave and coloured black, as are the hingepin and hook assemblies. Some know makers of this award are: Adolf Bock from Berlin, (FEC. ADOLF BOCK AUSF. SCHWERIN BERLIN) Schwerin from Berlin, (SCHWERIN BERLIN 68) Friedrich Orth from Vienna, (f.o.) Rudolf Souval from Vienna, (R.S.) Richard Simm & Sohn from Gablonz ad N. (R.S.&S.) and B. H. Mayer Pforzheim. (L/18) Theres also a second version of the award, made by Mourgeon from Paris. This one is identical to the former award. The High Seas Fleet War Badge was presented in a dark blue box with blue flock base and white silk lining, or it was presented in a grey paper packet with the award name stenciled on the front. It was presented with a standard award-document. The award was worn on the lower left breast pocket, underneath the Iron Cross First Class if awarded, or equivalent grade award.

It was awarded to officers and men of the Kriegsmarine serving aboard ships of the German Fleet. This were mainly the battleships and cruisers, but also the ships that were supporting them on operations. Lower ranking personnel was nominated for the award by the commander of the battlegroup, other navy personnel was nominated by Navy Headquarters. The criteria for receiving the award were:

-12 weeks service on a battleship or cruiser, with proof of distinction and good conduct.

The number of weeks were reduced if one of these conditions were met:

- If the recipient was wounded or killed during the voyage.
- Outstanding achievements in an engagement.
- If the cruise was successful.
- Individual's ship was sunk in action. (Bismarck, Admiral Graf Spee, Blücher)
- For participation in "Rawalpindi" and "Jan Mayen".
- All crew members of the Scharnhorst and Gneisenau received the award in view of the operational effectiveness of the ships.
- To every sailor who was present on the Tirpitz when it was bombed and sunk by the British R.A.F. in Tromsö Fjord on November 12th, 1944.

HMS Rawalpindi was an British armed merchant cruiser, (16.700 Brt) which was sunk by the German Scharnhorst and Gneisenau on November 23rd, 1939.

The pocket battleship Deutschland sailed in November 1939 from Greenland towards the south and sank two enemy ships off Jan Mayen Island.


High Seas Fleet War Badge with Diamonds.
This type was produced in solid silver. (.800) The swastika is slightly enlarged and holds 14 "Rose-cut" diamonds in it. There are many uncertainties about the existence of this award. Some high ranked German naval officers have claimed that it was usual practice for navy personnel receiving the Oak leaves to the Knights Cross would simultaneously be presented this award. Only Admiral Theodor Krancke (Marine-gruppenbefehlhaber West 18-10-1944) is considered to have been awarded this decoration but he never received it. There is however, one specimen of this award in existence. It is in a private English collection and is undoubtedly an original. However is it uncertain whether this is a specimen that was never presented, or if there has been a presentation, still unknown to this day. 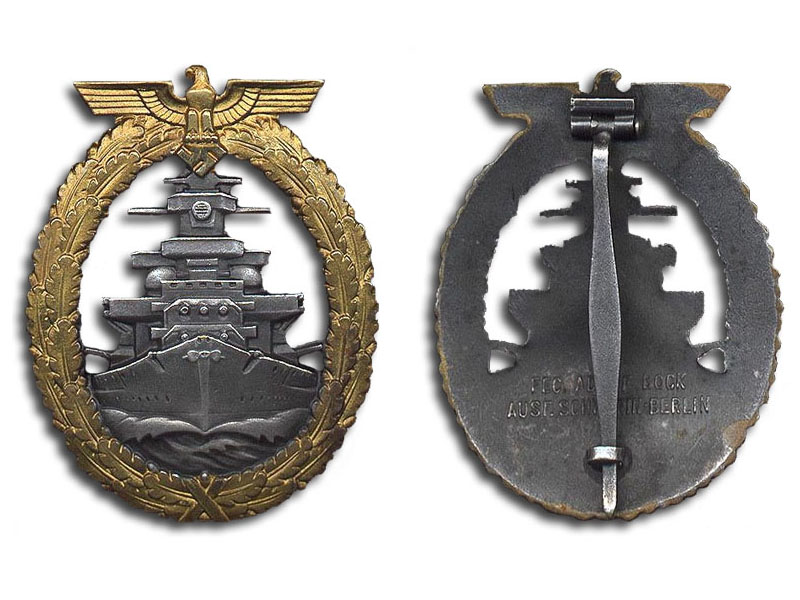