The Panzervernichtungsabzeichen in Gold was instituted by Adolf Hitler on December 18th, 1943.
The golden version was awarded for each fifth tank or armoured car that was destroyed. The four silver decorations that were received earlier had to be removed and be turned in after the golden version was awarded for each fifth award. To set an example, when one military was awarded a total of fourteen awards, he was to wear two golden (10) and four silver ones. With the next awarding the four silver ones were to be removed and a new golden one was to be sewn to the uniform.

The decoration is of the same design as the silver one. The main difference can be found in the ribbon the tank is placed on. Where the silver version has a silver one, the gold version has a ribbon that was made with gold cellon or gold bullion wire. Until know two types have been identified. The early type awards bear a tank (Panzer Mk IV) with silver wash, where later awards had the same blackened tank as the silver class. Another special version that has been found is that with a silver ribbon of the silver version, but with a golden tank. Until now it is not known whether this was an official version or one produced in the field.
There is no knowledge of any produced award cases. It is known to have been produced by several factories but none were marked.

The decoration was to be worn on the right upper arm. When more decorations were received, the next one was to be worn under the ones received before. It could formally be obtained for the single handed destruction of five enemy tanks using hand held weapons such as a hand grenade, panzerfaust, satchel charge, etc.
A total of 421 known recipients are identified to have been awarded the golden version. 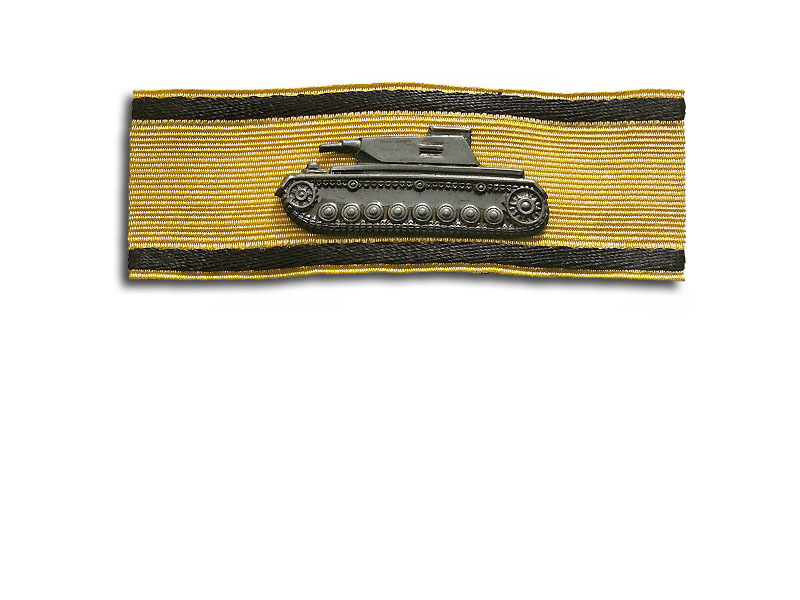