After the war Friedrich Anding served in the Bundeswehr and finally reached the rank of Captain of the reserves.

Awarded for his actions on the night of the 14./15.04.1945 during the tank battle for Stadensen (located in the Uelzen area).

After engaging in combat around the village of Nettelkamp, the Pz.Jäg.Abt. GD pulled back towards the village of Stadensen in the direction of Holdenstedt. Among the German units going in this direction was a car packed full of Panzerfausts. The vehicles driver was Obergefreiter Stützle and its passengers Major Walle and his adjutant Leutnant Anding. As the Germans approached the village they found it being defended by the Glasgow Highlanders (belonging to the 227th Scottish Brigade), who were reinforced by two artillery batteries, infantry guns, a company of Churchill tanks and an anti-tank gun platoon.

In the bitter night fighting which followed the British initially succeeded in knocking out two German SPWs. However at this point Anding and his two comrades dismounted their vehicles and wrought carnage among the defenders. Anding himself was credited with destroyed 6 tanks and 5 armoured cars during this engagement, as is stated in the following Knights Cross recommendation...

Leutnant Anding destroyed 6 enemy tanks in close combat via Panzerfausts during the battle near Nettelkamp and Stadensen on the 15.04.1945.

It should be noted, however, that Allied records reveal that a relatively small number of actual AFVs were destroyed in this battle. However, they did lose a great deal of their Bren carriers in their engagement. It thus appears most likely that the Germans either confused or conflated these tracked vehicles with true tanks.

Was recommended to receive the Deutsches Kreuz in Gold but was awarded the Ritterkreuz. 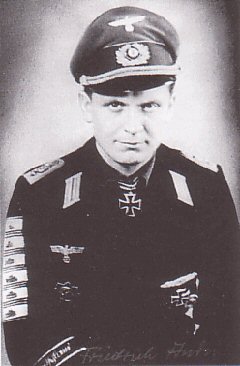