Instituted on July 7th 1993 by decree of President Yeltsin. Could be awarded to all living veterans of the war and to those that were in German imprisonement during the conflict.

The Medal measures 32 mm in diameter. On the obverse is shown the Kremlin with the Spasskij Tower and Basil the Blessed Churchwith written underneath the years 1945 : 1995 and the Soviet Order of the Patriotic War, and two laurel sprays at the bottom. The reverse bears the inscription "50 / Let / Pobyedy / v Velikoy /Otetshesthvenoy /Voyne / 1941 / 1945" . The ribbon is half orange yellow with three black stripes (of the Russian Order of St. George)and half red. This medal has two types that can only be seperated beceause Type 1 has the letters LMD on the medals ring and Type 2 not. LMD stands for the Leningrad Mint. Type 2 was produced by the Moscow Mint. 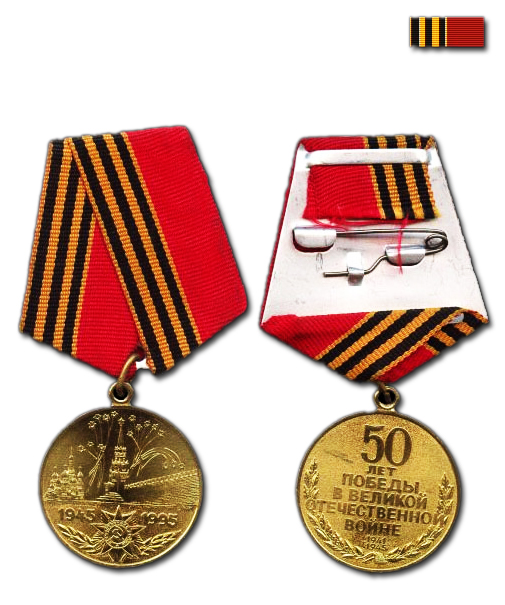