The Order of the Patriotic War was the first Soviet award instituted during the Great Patriotic War, the War between the Axis countries and the Soviet Union at the Eastern Front from 1941 to 1945. The order was instituted in two classes by a decree of the Presidium of the Supreme Soviet of the USSR on May 20 1942. The 1st Class was first awarded on July 2 1942 to three artillerymen for actions near Kharkov. Six other artillerymen got the first pieces of the 2nd Class on this date.

The order was designed by A.I. Kuznetsov. The award consists of a five-pointed, red-enamelled star with a five-pointed rayed star on the background. This star was of 583/1000 parts gold on the 1st Class order and silver on the 2nd Class. The star shows a sabre and rifle placed crosswise. Theres a red-enamelled ground on the red star with a white-enamelled border containing the inscription Otechestvennaya Voina, meaning Patriotic War. A hammer and sickle simbol of 583/1000 parts gold is attached in the center of the order. All orders measure approximately 23 mm from the center to any tip of the red star. The distance between each red star tip is approximately 27 mm.

The statutes of the Order of the Patriotic War are quite extensive. The order could be awarded to servicemen, border troops, NKVD troops and partisans of all ranks, civilians, foreigners, units and institutions for actions against the enemy. Examples of actions which merited the 1st Class were the destruction of three enemy planes as a fighter pilot, completing 30 succesful sorties as a crewmember of a short-range bomber or personally destroying two heavy tanks. For the 2nd Class respectively two enemy planes, 25 succesful sorties and one heavy tank were enough. Succesful artillery observers, staff officers, technicians and quartermasters could, for example, also be decorated. As of 1947 civilians, units and institutions could no longer be awarded the order, and as of 1980 neither could foreigners. The Order of the Patriotic War was, until 1977, one of the few orders which did not have to be returned to the state once the recipient died but could be kept by the next of kin. Many pieces of the order were awarded posthumously.

In 1984 the state started producing Orders of the Patriotic War 1st and 2nd Class again. It was awarded to all the surviving veterans of the war. For this 1985 issue new statuted were established. The 1st Class of the 1985 issue was awarded to all the Heroes of the Soviet Union, Cavaliers of all three Orders of Glory, Marshals, Generals, Admirals, invalids who were wounded in battle, and all veterans who had been wounded and previously been awarded an order or a Medal for Bravery, Medal for Military Merit, Medal of Ushakov, Medal of Nakhimov or a Medal to the Partisan. All other veterans were awarded the 2nd Class.

Type 1 pieces of both classes are heavily faked. Of the types 2 and 3 no fakes have been observed yet. The solid gold rayed star of a type 2, 1st Class is often replaced by a gold-plated replacement. Many original type 1, 2nd Class have the rayed stars gold-plated, making the piece into a 1st Class. 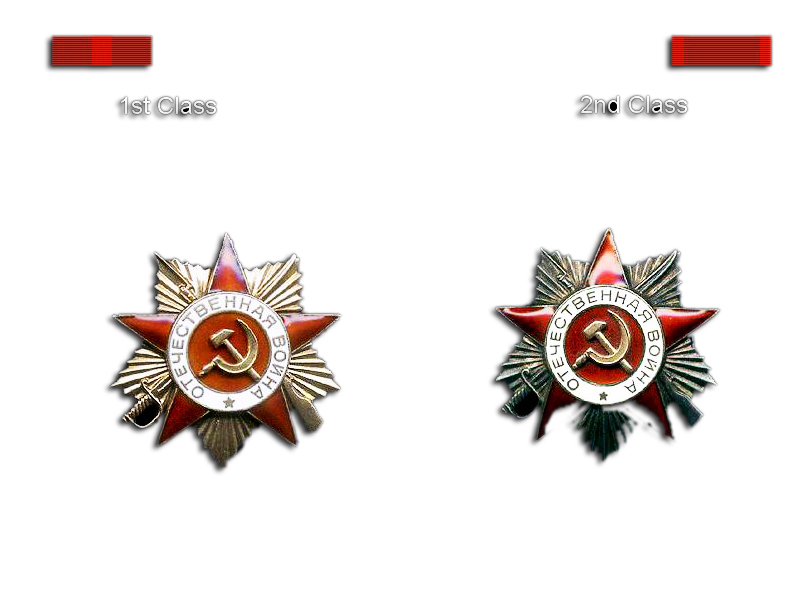