The German Cross (Deutschen Kreuz) is build up out of 5 separate parts and although the name suggests otherwise, it has the shape of a large 8-pointed breast star with in the center a large black swastika which is outlined in silver. The name of this award comes from this 21,5 mm big swastika. This swastika is placed upon a red-bordered silver disk and upon this red border is a silver laurel leaf wreath mounted. The silver wreath measures 39 mm across and is made out of single laurel leaves that are bounded together with a silk lint. At the bottom of the wreath is a square box with the year 1941 impressed into it. This date refers to the year of institution and from underneath this wreath emerge the eight star points. These points are chemically blackened and have the appearance of sunrays. Underneath these points is a 63 mm large silver backing plate placed which has the same shape as the award, only its slightly bigger so it forms the outer line of the award. At the reverse are 4 or 6 rivets visible and through the number of rivets you can recognize if the award was made in Germany or Austria. The German Crosses with 4 rivets were made in Germany and the pieces with 6 rivets in Austria. Further is there at the reverse a large width pin with a standard hook construction placed. If the award is marked with the LDO-number of the producer, then it is stamped in either the front or backside of the pin. To prevent damaging the award during combat, there was also a cloth version made. This cloth version has a metal wreath and the backing cloth colour is the same as the tunic colour of the corresponding Army branch. Fieldgrey is for the Army (Heer) and Waffen-SS, bleu-grey for the Air Force, (Luftwaffe) Marine bleu for the Navy (Kriegsmarine) and black for the Armored forces.

The German Cross in Silver (Deutsches Kreuz in Silber) was awarded for honourable military services in the execution of the war effort but where the Knights Cross wasnt awarded for. The recipient did however already had to own the War Merit Cross 1st Class with swords (Kriegsverdienstkreuz 1 Klasse mit Schwertern) or the Iron Cross 1st Class. The exact number of times that the German Cross in Silver was bestowed is still unknown at this time.

The OBdW barred/blocked the awarding of the German Cross in Silver from May 3rd, 1944 until June 8th, 1944. On July 21st, 1944, a decree by Adolf Hitler was issued that recommendations to members of the Oberkommandos der Wehrmacht not were to be taken in consideration before it was known the person in question would end his service with the Oberkommando. 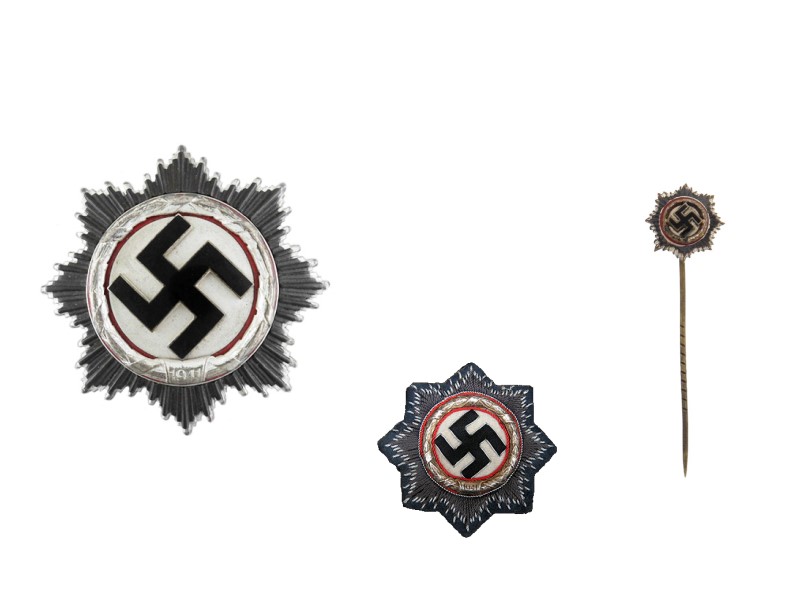