The Wound Badge 1939 (Verwundetenabzeichen 1939) was instituted on 01-09-1939 by Hitler, to be able to award the wounded soldiers. It became eventually the most awarded badge and also one of the most honored, because the only way to get this award was by the loss of blood. Frostbite was the only disease where for this award could be awarded. The award was produced in three versions namely in black, silver and gold. At first was this badge only awarded for military personnel but from March 1943 onwards, could this badge also be awarded to civilians that were wounded in aerial bombardments. This came by the increasing number of large Allied air raids and because of that, found men it appropriate to award the increasing number of civilian casualties with this badge.

Two interesting recipients of the Wound Badge 1939 are: SS-Sturmbahnführer Boris Kraas and SS-Unterscharführer Thomas Heller Cooper. SS-Sturmbahnführer Boris Kraas was wounded 16 times at the East front in the time of four years. His 16th wound was also his fatal one. He died from this wound at 13-02-1945 in a Reservelazarett at Linz/Donau. SS-Unterscharführer Thomas Heller Cooper was one of the few Britisch that fought in the German army and he was the only one that received a German War Badge. He got severely injured at both his legs in February 1943 in the Schablinov (Russia) area. For this he was later awarded with the Wound badge in silver.

The black version was usually awarded in a paper packet where the award name was stenciled on. The silver and gold versions were normally awarded in a black or a burgundy box, with an equal colored inner site. Later during the war also these two were awarded in paper packets. The badge was awarded with a standard award document and it was worn on the lower left breast pocket, underneath all other present awards. The awarding was also notated in the Soldbuch. Some know producers are:
Wilhelm Deumer from Lüdenscheid (3), Steinhauser & Lück from Lüdenscheid (4), Gustav Brehmer from Markneukirchen (13), Alois Rettenmaier from Schwabisch-Gmund (16), B.H. Mayer from Pforzheim (26), Hauptmunzamt from Vienna (30), W. Hobachter from Vienna (32), Klein & Quenzer AG from Idar/Oberstein (65), Overhoff & Cie from Lüdenscheid (81), Josef Rücker & Sohn from Gablonz ad N. (92), Rudolf Wächtler & Lange from Mittweida (100), Carl Wild from Hamburg (107), Rudolf Schanes from Vienna (124), Frederich Orth from Vienna (L/14), Rudolf Souval from Vienna(L/22) en Boerger & Co from Berlin (L/57). 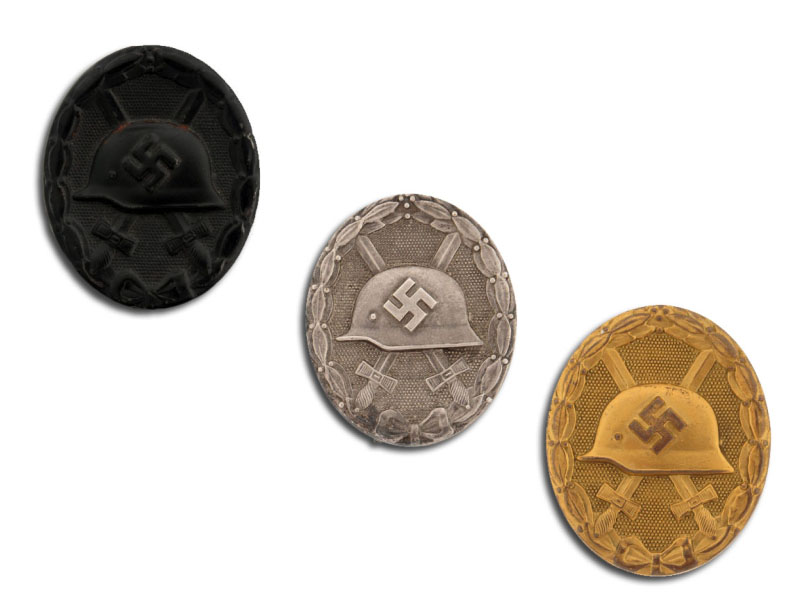