The original name for this decoration is the "Sonderabzeichen für niederkampfen Panzerkampfwagen durch Einzelkämpfer", but most commonly it was referred to as "Panzervernichtungsabzeichen" or "Panzerknackerabzeichen".

The tank destruction badge was instituded by Hitler on March 9th, 1942 to honor individuals (anti-tank units were not eligible for this award) who single handedly destroyed an enemy tank with hand held explosives such as a panzerfaust, satchel charge or grenade. This award was made retroactive to the beginning of the invasion of the Soviet Union (June 22, 1941).

As individuals earned multiple badges, it became evident that a higher class was needed. Therefore on December 18, 1943, a gold class was instituted to signify the single-handed destruction of five tanks.

Upon presentation, the badge was pinned to the sleeve of the recipient in a ceremony and was later sewn on the uniform by the individual.
The silver badge was worn on the upper right arm of the tunic with subsequent awards being attached directly below the first one until four were attached at one time. On the award of a fifth badge, the four were taken off the uniform and replaced with a single gold badge. On the award of a sixth badge, a silver class was attached below the gold class. The process repeated itself until a tenth badge was awarded, then the silver badges were replaced by a second gold badge. Again, the process continued. The highest numbers of awards given to a single man were twenty-one, awarded to Oberstleutnant Günther Viezenz. 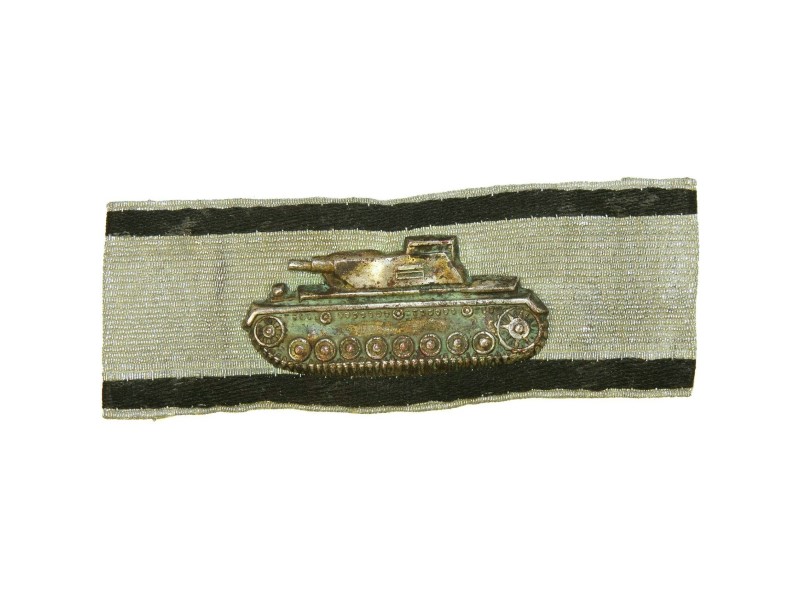 Panzervernichtungsabzeichen in GoldTank Destruction Badge in Gold
In the database: 29
Issued:421

Panzervernichtungsabzeichen in SilberTank Destruction Badge in Silver
In the database: 443
Issued:18541