The Close Combat Bar (Nahkampfspange) was instituted on 25-11-1942 by Hitler to reward those who had taken part in fierce hand-to-hand combat. Although this award was seen as a typical Infantry (Heer) award, it was possible that men of a different brand of the armed forces would be awarded with this bar. For example paratroopers (fallschirmjagers), members of the Hermann Göring Division and some Luftwaffe Field Division soldiers were awarded with this award. It was either not very common that a non-infantryman was awarded with this bar.

The Close Combat Bar is designed by Wilhelm Ernst Peekhaus of Berlin and it was instituted in three grades. The bronze grade (I Stufe) was awarded for 15 days close combat, the silver grade (II Stufe) for 30 days and the golden grade (III Stufe) for 50 days close combat. The number of combat days was counted from 01-12-1942 onwards. For the soldiers who had already been in combat in Africa and at the Eastern front from 22-06-1941 onwards, there was a special credit system introduced. This system worked as follows;

Through this it was possible that some soldiers who had been on active duty from 1940 onwards, that they could immediately been awarded with the bronze grade as soon as it was instituted. It was also possible for the division commandant to shorten the needed number of days with the severely wounded soldiers. When these soldiers became so badly wounded that they couldnt for fill the needed number of days, then were 10 days of close combat enough for the bronze grade, 20 days for the silver grade and 40 days for the golden grade.

The highest number of know close combat days made by one person are 84. These were made by SS-Hauptscharführer Hermann Maringgele. Major Georg Wenzelburger follows him with 78 confirmed close combat days.

The Close Combat Bar was highly regarded among the combat troops and was considered as the highest infantry award. The bronze and silver grades were presented in a paper packet with the name of the award stencilled on it. Later during the war a simple cellophane paper replaced this paper packet. The golden grade was presented in a long black box, with a black velvet base and a white silk lid. It was presented with a standard award document and conferment of the award was entered in the Soldbuch. The Close Combat Bar was worn above the left breast pocket and then 1cm above the ribbon bar. When the recipient owned multiple grades, only the highest grade was worn.

Some know producers are: 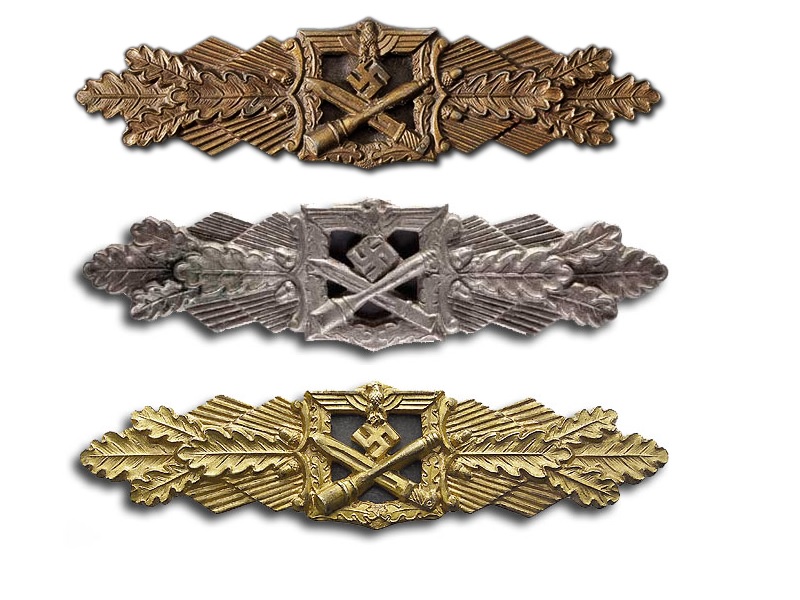 Nahkampfspange in GoldClose Combat Bar in Gold
In the database: 648
Issued:632