SS-Sturmbannführer Baum has successfully defended his sector near Salutschje against all the overwhelming Russian attacks set against it ever since the 23.02.1942.

On the 07.02.1942, at 00:20, the Russians launched an attack against Baums Bataillon following a heavy bombardment by artillery and mortars. They tied down the Bataillon from the front along the line SchumilkinoSalutschje while simultaneously launching a pincer maneuver with tank support.

The following hostile units were present in this attack:

The defending Bataillon had already been majorly depleted. Consequently, during the course of the bitter night fighting, the Russians were able to enter into the northern part of Schumilkino and the southeastern part of Salutschje.

On his own initiative, and with death-defying readiness, SS-Sturmbannführer Baum launched a counterthrust with a few hastily rounded up men and elements of an attached Kompanie. This counterthrust succeeded in eliminating the enemy forces that had entered into both Salutschje and Schumilkino.

The frontline was firmly in our hands by 06:30 on the same day. All further enemy attacks collapsed under our defensive fire before they had reached the trench lines. Over 300 dead Russians lay amongst and in front of this position by the conclusion of the combat on this day.

The successful holding of this position by Baums Bataillon was of decisive importance. An enemy penetration here would not only have created the danger that our lines to the north and east would be rolled up, but would also have enabled the Russians to seize the KobylkinoSchubino road, an objective of decisive importance to the enemy. Control of this road would have enabled them to effortlessly shift supplies and troops to their sectors opposite the northern, western and southern perimeter of Gruppe Eicke.

I ask that SS-Sturmbannführer Eicke be awarded the Knights Cross of the Iron Cross in recognition of his heroic bravery and its associated result.
989th award.
Preliminary Ownersdocument for the Ritterkreuz des Eisernen Kreuzes van 8th May 1942 for SS-Sturmbannführer Baum, Kdr. III./SS-T. I.R.3.
Dated, 9th May 1942.

1. On the night of the 23./24.02.1943 the SS-Pz.G.R. T received orders to launch an attack in conjunction with the SS-Pz.Rgt. 3 (to which the I. (gep.) /T was directly attached). It was to first strike the enemy in the area north of Pawlograd. Then, after taking Wjasowol, it would throw the enemy back across the Malaja Ternowka river while simultaneously securing a bridgehead northeast of Kulakowo in order to enable the Rgt. T to cross over the Ternowka river.

SS-Obersturmbannführer Baum and his I./T commenced their attack during the early morning hours of the next day alongside the SS-Pz.Rgt. 3. They drove past Wjasowol in a bold attack, pursued the fleeing enemy and pushed across the Ternowka river. Then the Bataillon commander ordered his men to pivot to the southeast and utilize the momentum of their attack to immediately thrust to the northern edge of Werbki. Disregarding the enemy tanks coming out of Werbki, they managed to reach the village ahead of the SS-Pz.Rgt. 3 and consequently bring relief to the elements of the SS-Div. Das Reich that were attacking from the south. The result was that contact between the two divisions was established on the afternoon of this day.

The Bataillon commander was always at the head of his unit during the course of this bold thrust. His actions here prevented the escape of those enemy forces that were still on the west bank of the Ternowka river.

2. On the 01.03.1943 the SS-Pz.Gr.Rgt. T found itself marching northwards in the Orel sector. Operating in the area of the Div. Totenkopf (itself subordinated to the SS-Pz.Korps), its mission was to move out from Pawlowka and Nischnij Orel on the next day. In the course of the planned advance it was envisaged that the unit would turn to the northwest, cross the Berestowaja river and push past the Berestowenka Heights.

However the I. (gep.) /T and I./SS-Pz.Rgt. 3 already began advancing on the following night, pushing towards Par. Schlachowaja in the face of fierce hostile resistance. Despite brutal snowstorms, as well as a less than ideal supply situation with the Pz.Abt., the regimental commander nevertheless made the ruthless decision to advance to the Berestowaja river as quickly as possible in order to link up with the LSSAH elements that were thrusting from the southwest. This would cut off the retreat route of those enemy columns to the east of the area. Heavy enemy counterattacks with tank support were crushed, and the ruthless actions of both the Rgt. and the subordinated Pz.Abt. meant that contact could be established with the LSSAH on the 03.03.1943, thereby cutting off the enemys path to the east. At the same time the SS-Pz.Gr.Rgt. Theodor Eicke had meanwhile succeeded in conducting its own advance further to the north as far as Kotjarowka and Medwedowka. The overall result was that strong elements of the 3rd Russian Tank Army were encircled in the area north of Schljachowaja and Par. Schljachowaja, and the stage for their destruction was likewise set. The Rgt. T and its subordinated I./SS-Pz.Rgt. 3 alone managed to seize the following spoils of war:

This was a victory made possible by the bold decisions and aggressiveness of SS-Obersturmbannführer Baum.

3. On the 12.03.1943, as the enemy continued to put up fierce resistance in Kharkov, SS-Pz.Gr.Rgt. T was deployed along the line RuskajaLosowajaDergatschiFesski FarmMjakijmjaka Farm in order to cover the fighting in the city. At 11:30 on this day it received the order to leave behind its II. Bataillon in the old positions and immediately send the remainder of its troops in a thrust through the eastern part of Kharkov to the KharkovTschugujew road. It was intended that these forces would eventually capture both Tschugujew and the Don bridges in order to prevent the enemy troops in the Smijew area from escaping to the east and northeast.

The Rgt. set out at 14:00, and it managed to overcome the catastrophically bad road conditions and reach the village of Ssorokowka during the night. This place was attacked in the early morning hours and cleared of the enemy. The Rgt. and its subordinated I./SS-Pz.Rgt. 3 continued to press inexorably onwards in the face of unceasing opposition. The regimental commander was constantly among the ranks of the lead Bataillon, and from here he provided the entire Rgt. with an example of bravery. Thusly, and already on the evening of the 13.03.1943, Rogan (located along the KharkovTschugujew road) was captured by the III./T and a few Panzers that had been allotted the Rgt.s last drops of fuel. The KharkovTschugujew road was thusly interdicted, and contact was simultaneously established with the elements of the SS-Pz.Gr.Div. Das Reich that were attacking from the southwest. With that the ring around Kharkov was closed.

Despite the presence of enemy armoured attacks from the east against Rogan, the regimental commander decided to continue offensive operations after receiving new stocks of fuel from the air. He ordered a continued attack against Tschugujew to be launched at 15:00 on the next day. This attack ran into tough resistance at Kamenaja Jaruga, however the enemy here was surprised by the swift German advance and eventually overrun. This led to the capture of Tschugujew, and consequently the blocking of all crossings over the Donez river located there during the evening hours of the same day.

This much-deserved victory here can again be attributed to the courageous decisions and personal bravery of SS-Obersturmbannführer Baum.

SS-Obersturmbannführer Baum went on to distinguish himself through his outstanding bravery on the 05.07.1943 as he and his men fought to break through the strong Russian positions near Beresoff, all while constantly in the face of heavy enemy infantry, artillery and tank fire. Here he penetrated into the enemy positions with the foremost elements of his Rgt. SS-Obersturmbannführer Baum was wounded during this engagement, however he remained with his men.

He served as a magnificent example for his men during the heavy Russian armoured attacks against the Psel bridgehead on the 13. and 14.07.1943. Here he rushed to all the hotspots of the combat and constituted the soul of resistance against the overwhelming enemy pressure.

 The renewed award is being bestowed upon SS-Standartenführer Baum for his success in freeing significant elements of German units that had encircled on the Invasion Front.

This text refers to his actions during Operation Cobra. Specifically, he apparently halted the advance of the US VII. Corps on the morning of the 28.07.1944. After this he led the encircled western portion of the 7. Armee in a breakthrough back to friendly lines further east. He was credited with salvaging a large part of the German forces that were trapped on the western side of the Vire.
95th Award.
Submitted on 23rd August 1944 by Generalfeldmaschall Model.
Preliminary Ownersdocument for the Eichenlaub mit Schwertern zum Ritterkreuz des Eisernen Kreuzes van 2.9.1944 for SS-Standartenführer Otto Baum, Kommandeur SSPz. Div.  Das Reich.
Dated, 14th Ocrober 1944.
Served at the same time as Führer 2. SS-Panzer-Division "Das Reich". 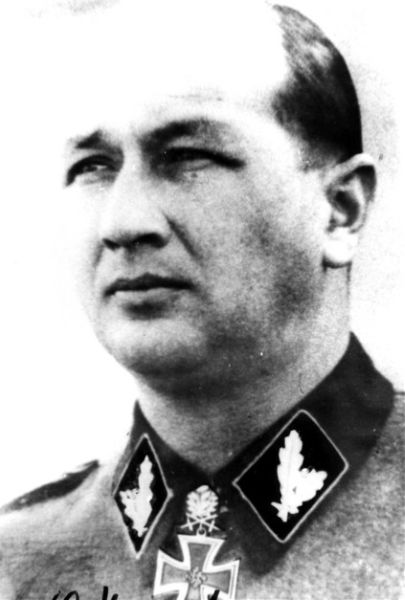