 On the 13.04.1941 SS-Sturmbannführer Meyer received orders to reconnoiter towards Kastoria via the Klisura Pass. Here he achieved a success (borne of his own initiative) that decisively contributed to the swift capture of Kastoria by cutting off the retreat route to the city for significant elements of the Greeks northern wing. Sturmbannführer Meyer had already played a major role in the success of the LSSAH during the western campaign whilst serving as commander of a Vorausabteilung.

I recommend the commander of the LSSAH Aufklärungs-Abteilung, SS-Obersturmbannführer Kurt Meyer, for the award of the Oakleaves to the Knights Cross of the Iron Cross.

Since being awarded the Knights Cross to the Iron Cross on the 18.05.1941 SS-Obersturmbannführer Meyer has repeatedly distinguished himself during the campaign in the East through his outstanding personal bravery and the skillful leadership of his Aufklärungs-Abteilung.

On the 19.08.1941 Meyer succeeded in penetrating into the heavily defended city of Cherson via a deliberate flank attack from the east. This triggered the collapse of the strong hostile defensive front at Cherson. The city (along with its valuable port and industrial facilities) fell into our hands almost without damage. Numerous armed ships were destroyed, and the prevention of ferry traffic across the Dnieper significantly impaired the retreat of those enemy forces that were defending the city.

Later, following the capture of Nowaja Majatschka, the Aufklärungs-Abteilung launched a wide-ranging thrust towards the southwest. This sliced its way through the retreating enemy units up until as far as the heavily fortified strongpoint of Rf. Presbrashenka. This disrupted the retreat of strong enemy forces towards Perekop and inflicted high losses in men and materiel on the foe.

On the 15. & 16.09.1941 SS-Obersturmführer Meyer and his Aufklärungs-Abteilung launched a bold thrust eastwards in pursuit of the enemys 9th Army. This eventually brought the Abteilung to Ssalkowa and Genitschesk, which were both captured. With this the last railway and land connections to those Red Army forces located on the Crimea were cut off. Whats more, a train loaded with war materiel (including over 100 trucks) fell into friendly hands intact after the locomotive was shot up.

During the defense against enemy forces that had broken through in the Jelisawetowka area, the commander of the Aufklärungs-Abteilung managed to halt any further hostile advance via a skillfully conducted mobile defense along a broad front. In the subsequent offensive battles SS-Obersturmbannführer Meyer plunged into the fleeing enemy and established the bridgehead at Terpenjo despite powerful opposing resistance. This laid the groundwork for the bulk of the LSSAH to continue its pursuit of the enemy. Then, on the 05.10.1941, he [Meyer] scattered the staff of the enemys 9th Army in Romanowka.

On the 07.10.1941, during the thrust towards Berdjansk, SS-Obersturmbannführer Meyer entered into the city alongside strong enemy columns that were retreating towards Berdjansk from the west. By doing this he prevented the demolition of valuable armaments factories. Strong enemy forces were eliminated during the clearing of the city.

SS-Obersturmbannführer Meyer continued the pursuit on the following day, advancing alongside the fleeing enemy. Disregarding the strong hostile forces present on his extended left flank, he thrust into Mariupol against bitter resistance by a totally surprised enemy. He ultimately managed to secure control over this city of over 500000 residents, one which ranked second only to Odessa with regards to its importance as a harbour city for southern Russia. He also managed to seize control of the citys valuable armaments facilities, and thereby preempted any demolitions work on them by the foe.

When the LSSAH was transferred to the area east of Kharkov [in 1943] SS-Obersturmbannführer Meyer and his Aufklärungs-Abteilung were the first divisional elements to detrain at Tschugujew, and afterwards they immediately took up a defensive position east of the Donez in the area Vorst. Ossinowka-Kalmyzkoje-Malinowka.

From this position Meyer executed a series of spoiling attacks against strong elements of the Russian 12th Tank Corps. Thanks to his skillful leadership the enemy (which hitherto had a relatively unimpeded advance) was held up long enough for the bulk of the Division to arrive and take up its ordered defensive sector. Furthermore, despite strong enemy pressure, elements of the Aufklärungs-Abteilung under SS-Obersturmbannführer Meyers personal command thrust towards the southeast and managed to relieve significant elements of the encircled 298. Infanterie-Division.

The outstanding offensive spirit of the Aufklärungs-Abteilung and its commander proved sufficient to stop the advance of strong Russian forces to Kharkov whilst inflicting high losses on the foe.

When the Division set out from the Norefa area SS-Obersturmbannführer Meyer had the mission of conducting a wide-ranging thrust via Nowaja Wodologa in order to reach the Jefremowka area.

He ruthlessly carried out this task despite enemy resistance and the most difficult of terrain conditions. He and his Abteilung were the sole unit to reach the ordered attack objective, and despite being isolated from resupply for days they managed to hold their ground against non-stop enemy attacks. By doing so they tied down strong opposing forces and thereby facilitated the destruction of the 6th Russian Guards Cavalry Corps.

After they had received reinforcements the enemy attempted to halt the southern wing of the LSSAH by conducting a massive attack with the 172nd Rifle Division. Among the defenders involved was SS-Obersturmbannführer Meyer and his Abteilung (reinforced by a single Panzer-Kompanie), and in the ensuing battle they held Strongpoint Jefremowka against all enemy attacks. In the process they totally obliterated the 747th Russian Rifle Regiment.

In addition to numerous small-arms, the enemy lost:

On the 21.02.1943 SS-Obersturmbannführer Meyer received the mission to take his Abteilung and thrust southwards from Strongpoint Jefremowka in order to smash elements of the 6th Russian Rifle Division that were assembling in the Jeremojewka-Krutojarowka. This mission was immediately carried out.

After being awarded the Oakleaves SS-Standartenführer Meyer once again conducted deeds of outstanding bravery during the recapture of Kharkov. On the 10.-11.03.1943 he thrusted across the Kharkov-Belgorod road on his own initiative and proceeded to block the enemys retreat road to the east (Kharkov-Tschugujew) between the tractor factory and the citys edge. This success by Standartenführer Meyer and his Aufklärungs-Abteilung contributed significantly to bringing about the fall of Kharkov in 3 days.

At the start of the Invasion SS-Standartenführer Meyer, now commander of the SS-Panzer-Grenadier-Regiment 25, decisively influenced the course of the later fighting through the attack he conducted on his own initiative west and northwest of Caen on the 07.06.1944. He succeeded in throwing back the enemy (who had thrusted ahead with tanks as far as the Carpiquet airfield) back to the line Epron-Buron-Rots by a boldly led attack. Only through this swift and decisive action was it possible to push the frontline forwards a satisfactory distance to the north of Caen.

After Meyer took command of the Division the enemy commenced an attack in the left sector of the Division with the 11th (English) armoured division as well as the 49th & 15th English infantry divisions. Their goal was to secure a bridgehead over the Orne at St. Andre. Over the course of two days of very hard combat a breakthrough by overwhelming enemy forces was prevented, and the foe was brought to a halt along the Odon river. In this fighting 117 enemy tanks were destroyed.

On the 08.07.1944 the enemy launched an attack against Caen with the 3rd & 59th English plus the 3rd Canadian infantry divisions. They sustained heavy losses during the heavy, crisis-filled battle. Although the enemy succeeded in breaking through to the eastern edge of Caen by midday in the sector of the right neighbour, the Division in general managed to hold its position and prevent a breakthrough by enemy tanks that penetrated the line. By this the construction of a new frontline south of Caen was enabled. In this fighting the enemy lost 103 tanks.

On the 08.08.1944 the enemy launched an attack in the sector of the 89. Infanterie-Division with their 1st Polish armoured division, their aim being to capture Hill 140 (4 km northeast of Potigny). At the time one Kampfgruppe of the Division was engaged in heavy combat in the sector of the 271. Infanterie-Division against enemy tank/infantry forces that had penetrated across the Orne, and another Kampfgruppe was successfully fighting in both offense and defense east of Vire. Even so the Division was able to muster another Kampfgruppe against an enemy that had deeply penetrated the line here, and intercepted them along the line St. Aignan-Bretteville sur Laize. In the hard resultant combat the 1st Polish armoured division was badly bloodied, and 90 hostile tanks were destroyed.

Despite high friendly losses in the fighting on the 07.-08.08.1944, on the 09.08.1944 the Division managed to bring an attack of the 4th Canadian armoured division to a halt on the line St. Sylvain-Seignolles-Hill 111 (northwest of Rouvres)-Quesnay-Bray en Cinglais. In this time 103 enemy tanks were destroyed, and at the same time the Divisions actions enabled the construction of a new defensive line northwest of the Liaison creek.

It is solely to the credit of SS-Standartenführer Meyer, who was involved day and night alongside his regiments and battalions, that Caen was held for over a day despite the destruction of the 16. Lw.-Felddivision. Ruthlessly committing himself to the battle, Standartenführer Meyer could always be found wherever the situation threatened to fall apart. Along with his commanders he was the soul of fanatical resistance that succeeded in fending off the enemys efforts to take Caen.

Standartenführer Meyer, who would always inspire his soldiers forward in the most desperate hours, conducted exemplary actions that ensured that the initial enemy attempts to penetrate and break through into the favourable tank country southeast of Caen did not succeed. When the enemy was nevertheless ultimately able to push back the front east of the Orne due to his tremendous materiel superiority, SS-Standartenführer Meyer and his Division continued to provide the backbone for the whole frontline east of the Orne despite having suffered losses of over 6000 men. The successes and performance of the Division is a testament to the outstandingly brave and decisive leadership of its commander.

I hold SS-Standartenführer Meyer as being worthy of the Oakleaves with Swords to the Knights Cross of the Iron Cross on account of his distinguished service. 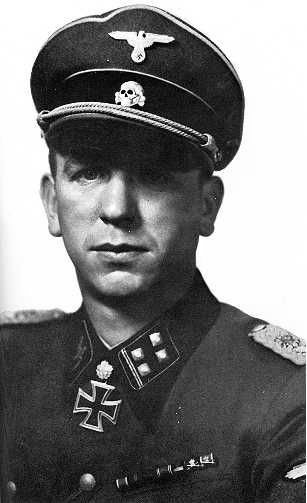 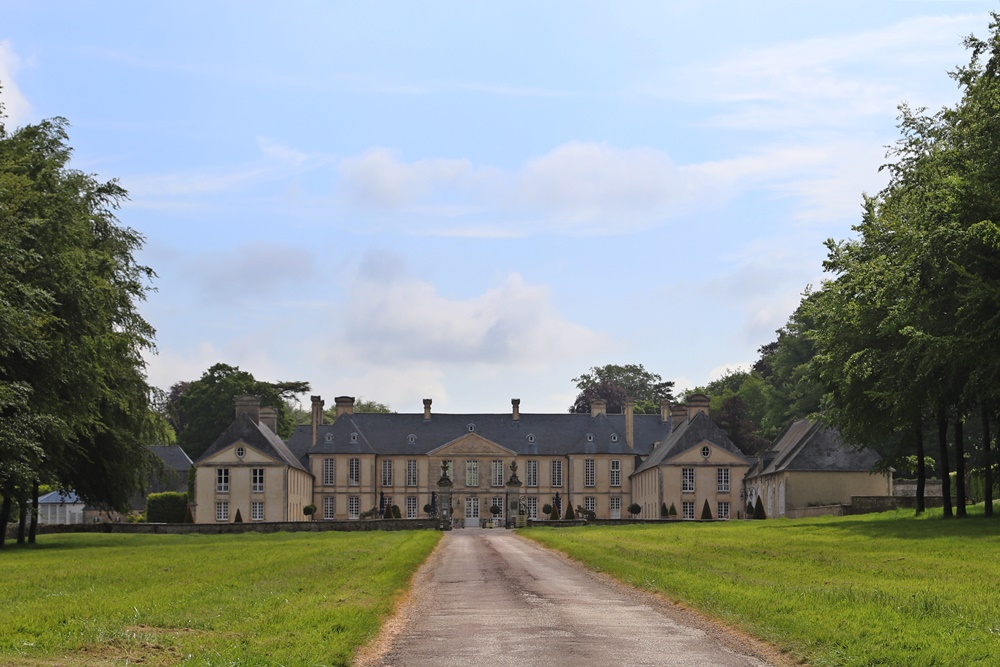 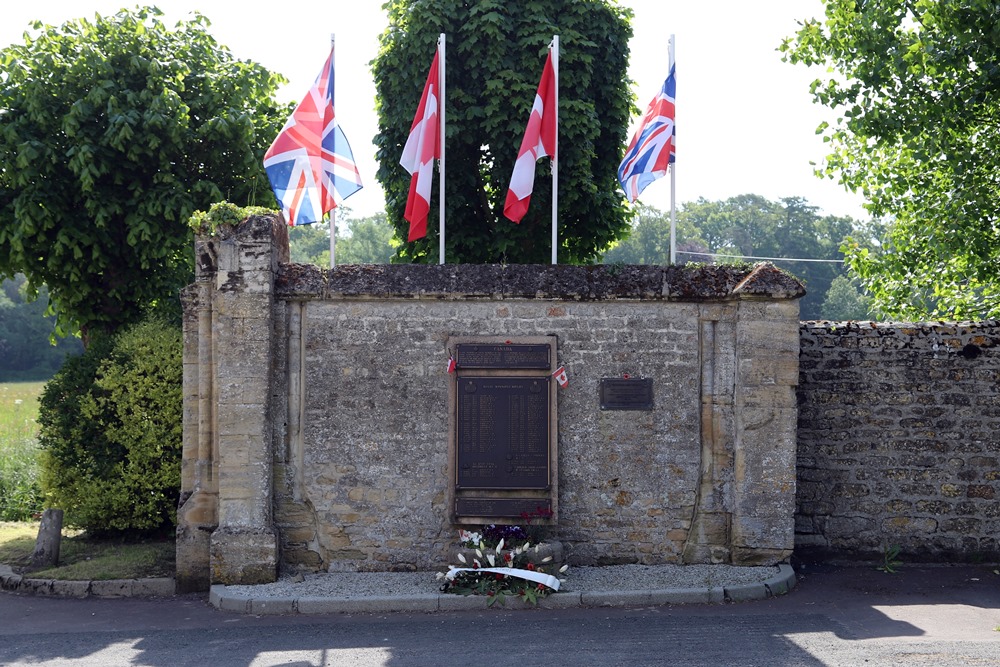