Johannes-Rudolf Mühlenkamp was born on 9th October 1910 in Metz. He entered the NSDAP with number 2 800 042 in 1933 and the SS in April of that year with the number 86 065. At first he was placed with the 4.SS-Standarte "Schleswig Holstein". In September 1934 he was shipped to the SS-Standarte "Germania". His training he received with the SS-Junkerschule at Braunschweig. In April and May 1936 he received some military training with the Kradschützen-Bataillon 2 in the German Heer and was transferred to the SS-Standarte "Germania" again in the spring of 1938 as commander of the 15.Kompanie. With this he entered the Polish Campaign in September 1939. The fightings in the west in June 1940 he took part in the SS-Verfügungsdivision and subsequently became Kommandeur of the Aufklärungs-Abteilung within the SS-Division "Das Reich". With this unit Mühlenkamp took part in the campaign in the Balkan and from June 1941 in the war against the Soviet Union. He was severely wounded in October 1941. Not before the beginning of 1942 he was sufficently recovered and in June he took over command of the SS-Panzer-Abteilung 5. He received the command of the SS-Panzer-Regiment 5 in March 1944 and on 6th August 1944 the command of the 5.SS-Panzer-Division "Wiking". Johannes Mühlenkamp became Inspekteur der Panzertruppen der Waffen-SS in October 1944 and commanded the 32.SS-Panzergrenadier-Division from February 1945 until he was wounded again in March. He died on 23rd September 1986. Mühlenkamps lies buried at Bredelem near Goslar, Germany.

Award 43/32
The name in Patzwall / Scherzer is Rudolf.

On the 22.-23.07.1942 SS-Sturmbannführer Mühlenkamp, commander of SS-Panzer-Abteilung 5 and leader of a Vorausabteilung of the Division, succeeded in breaking through 3 anti-tank ditch positions before Rostov in a bold advance that saw much hard combat. At 14:30 on the 23.07.1942 he broke into the western part of Rostov itself. He cleared and occupied this part of the city, thereafter thrusting his way to the bank of the Don along a broad front. In the course of the fighting he destroyed 19 enemy artillery pieces and 12 anti-tank guns, and captured numerous prisoners.

Through his bold and prudent conduct he contributed decisively to collapsing the west/northwest front of the deeply echeloned anti-tank ditch positions before Rostov as well as forcing the enemy into a disordered flight over the Don. In doing so he helped free the way to Rostov for the friendly Infanterie-Divisionen coming from the west and northwest. He was decisively involved in the seizure of Rostov, and created the preconditions required for the follow-up 73. & 125. Infanterie-Divisionen to cross the Don.

SS-Sturmbannführer Mühlenkamp is a holder of the Iron Cross First & Second Class (earned in the Polish campaign), and was awarded the German Cross in Gold for his services in the western and eastern campaigns.

During the defense against these strong enemy tank forces (which had largely already overrun the foremost lines) SS-Standartenführer Mühlenkamp, commander of SS-Panzer-Regiment 5, distinguished himself through the flexible leadership of his Panzer units.

On that day his Regiment succeeded in destroying over 100 enemy tanks. SS-Standartenführer Mühlenkamp heavily contributed to this success through his brave personal actions. It was only on account of his brave efforts that the hard pressed frontline was held. Therefore it must be proposed that he is worthy of being recognized with the Oakleaves to the Knights Cross of the Iron Cross.

This recommendation was sent from the LVI. Panzerkorps up the chain of command, however during the fighting in Lublin it was destroyed by enemy action. It has now been reconstructed in the aforementioned text.

In the meantime SS-Standartenführer Mühlenkamp has again outstandingly distinguished himself as follows:

a) In the course of his operations between the Vistula and Bug rivers, the enemy attacked the friendly defensive front in the Stanislawow and later Tluszcz-Sulejow areas from the southeast with strong forces of his own during the time period 04.-16.08.1944. These heavy enemy attacks were beaten off in hard, costly battles by the 5. SS-Pz.Div. (deployed in these areas) under the leadership of its new commander, SS-Standartenführer Mühlenkamp.

The enemy suffered high losses, and their goal of conducting a surprise capture of Warsaw did not succeed.

b) After a short regrouping and assimilation of new forces the enemy began his deliberately planned breakthrough attacks toward Warsaw on the 19.08.1944. Among these was an attack commenced against the sector of the 5. SS-Pz.Div. Wiking in the Trojany-Malopole-Slopsk area. Here alone they deployed 10 rifle divisions, 1 artillery division and the bulk of a tank corps. SS-Standartenführer Mühlenkamp and his SS soldiers smashed all enemy attempts to reach the city in extremely difficult and heavy fighting. Combat alternated between furious enemy attacks massively supported by artillery, aircraft and tanks on the one hand and our own swift counterthrusts on the other. In this time the divisional commander operated mostly in the foremost line, where he personally conducted counterthrusts and intervened in the combat where it is was necessary. By doing this his men found great strength, and were motivated to demonstrate an uncommonly seen will to resist and attitude of self-sacrifice.

The breakthrough towards Warsaw in this sector was prevented, and the enemy sustained such heavy losses that their attacks were broken off and suspended.

In all this time SS-Standartenführer Mühlenkamp showed outstanding military leadership, swift decisiveness, determined resolve and personal bravery. It is to his credit alone that this defensive success was ensured. 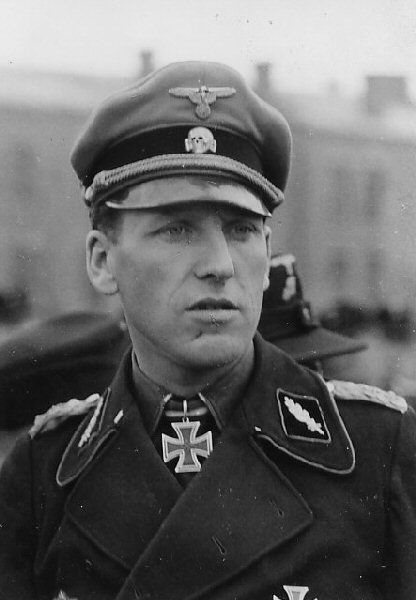