SS-Hauptscharführer Peichl has already distinguished himself as an outstanding NCO in all campaigns through his outstanding bravery and ruthlessness.

While serving as commander of a Panzerjäger-Zug during the fighting in Russia he often had a decisive role in the offensive and especially in the defensive successes of the Bataillon. An example of this was during a very difficult situation in the course of the fighting to contain an enemy bridgehead near Pij (on the Dnieper river). As the Bataillon was being overrun by a massive enemy armoured attack, with much resultant confusion, he destroyed 5 enemy T-34 tanks in close combat.

During the heavy fighting against the Allied Invasion Peichl once again displayed outstanding bravery and impressive leadership abilities.

In an energetic pursuit the swift American units succeeded in reaching the Westwall at almost the same time as the Bataillon. The individual bunkers and defensive installations had to be fought for in order to properly occupy them. As the Bataillon was very weak, was tasked with taking over an extremely broad sector, and was still waiting for one Kompanie to arrive, a very critical situation posed itself for the completion of the assigned mission.

As the Bataillon commander was still briefing another Kompanie, and was still unaware of the situation on the left flank, Peichl assembled elements from his 12. Kompanie and the Bataillon staff and launched a bold counterthrust against the enemy forces that had already penetrated into the defensive fortifications, throwing them back and occupying the bunkers. Only by this independent action was it possible at all to occupy the ordered frontline sector.

A short time after this the enemy commenced an attack with tanks and infantry. Several tanks broke through the dragons teeth barrier and opened fire at the bunker embrasures from very close range. Several bunkers were disabled by the strong fire. 4 Sherman tanks eventually stood before Peichls combat bunker, laying heavy fire on the embrasures and exits. No heavy weapons were available. Peichl recognized that now only decisive action would save the day. Despite the strong enemy bombardment he crawled out of the bunker, worked his way to the closest enemy tank and eliminated it with a Panzerfaust. After this tank went up in flames the 3 others fled, with the enemy infantry retreating with them.

Through putting his life on the line like this Peichl saved the situation. The Bataillon was now able to bring heavy weapons into position, and by inserting another Kompanie into the line the defensive front was stabilized. 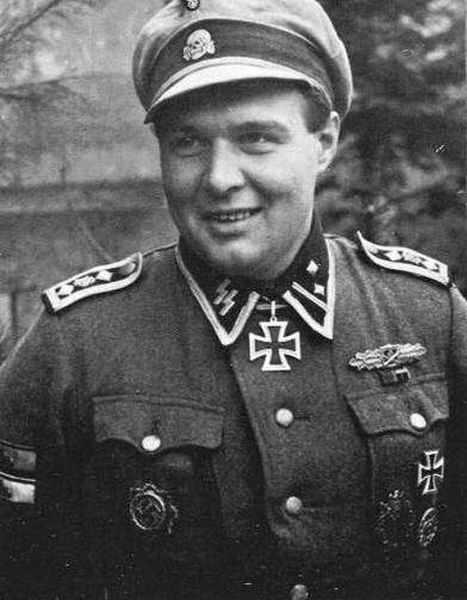