After being rushed to the Wolnaja Gorka area via rail transport, the SS-Pol.Gren.Rgt. 3 received its combat assignment on the 23.01.1944. Its mission was to occupy the gap between Kampfgruppen Speth (excluding Kromy) and Schuldt (excluding Saklinje) in order to guard the Korps supply road along the route Sselo GoraWolnaja GorkaLuga. Its opposition would consist of the 310th and 377th rifle divisions, which were attacking out of the area south of Krasny along the axis PodberesjeDolgowoTatino railway station.

On the following night (23./24.01.1944) the enemy launched a surprise attack that easily managed to capture Saklinje (the right cornerstone position of Kampfgruppe Schuldt) and smash those friendly forces in front of and around Puddubje. After this they sought to reach the Wolnaja GorkaWelegoschtschi road via Libunizy. This would have made any withdrawal movement by Kampfgruppe SS-Pol. Division through Welegoschtschi untenable, and would also have allowed the enemy to conduct an uncontested advance to the retreat road of XXVIII. Armee-Korps.

At this time Sturmbannführer Traupe (commander of I./SS-Pol.Gren.Rgt. 3) and his Bataillon were in positions around Libunizy, on the Regiments left flank. His mission was to hold Libunizy and thereby prevent any hostile advance to the Wolnaja GorkaWelegoschtschi road until his Kampfgruppe had been ordered to withdraw by the Korps.

The enemy understood the importance of this position for their continued operations, and so in the time period 24.-28.01.1944 they tried to repeatedly tried to take LibunizyLushkoje in order to roll up the positions of those friendly forces (specifically Kampfgruppe SS-Pol.Div. and Kampfgruppe Speth) that were located south of the road Wolnaja GorkaBatizkajaLuga. They struck with and without artillery preparation, by day and night, with company-sized assault groups or in regimental strength, in multiple waves.

The Russians never achieved such a success thanks to the determined defensive willpower and superior leadership of Sturmbannführer Traupe. Traupe was the soul of the resistance, and was present wherever the danger was greatest. He launched repeated counterthrusts throughout this time, first with his reserve Zug, then with reserve squads, and then with just 3-4 men of his staff by the conclusion of the battle. Each time he and his men managed to eject the enemy in bitter close combat and thereby bring the Russian attacks to a halt. Although he was himself wounded in this period he continued to retain control of his Bataillon until the end, by which time most of his officers, NCOs and men had become casualties.

Traupe has served at the frontline since the beginning of the war, and from the start he has repeatedly demonstrated unceasing devotion to duty, aggressiveness and leadership prowess. 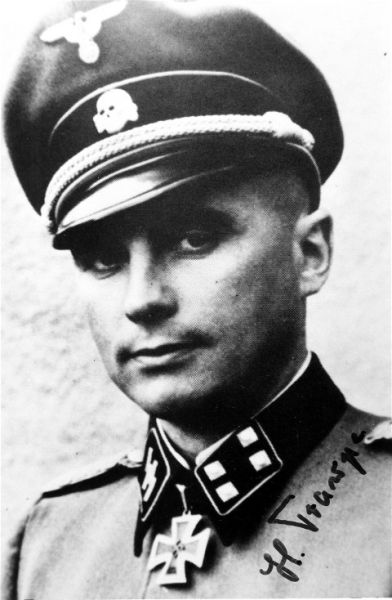