The full recommendation reads as follows...
"In the attack on 5.7.1943, the III./SS-Pz.Gren.Rgt. "Deutschland" under the leadership of SS-Sturmbannführer Wisliceny, was ordered to take the combat outposts around the village of Jachontoff and to ready themselves there for further attacks.
In a resolute storming attack, SS-Sturmbannführer Wisliceny and his grenadiers destroyed the combat outposts, took possession of them and stood ready for their next attack. After this Sturmgeschütze advanced together with the III./SS-Pz.Gren.Rgt. "Deutschland" under the cover of a Stuka attack and their own artillery fire. They achieved a deep penetration into the fortified anti-tank ditch and snatched these strong positions from the enemy.
During the night, heavy rain descended on them and this delayed the attack with the Sturmgeschütze by 2 hours. The Stuka attack and artillery fire could not be fully exploited in this situation, therefore they needed an immediate attack by the Sturmgeschütze which would start after the last shell had been fired. But strong enemy artillery fire began to hit the German positions. Recognizing this danger, one that threatened the entire assault, Wisliceny took the bold decision to attack the enemy positions and break into them in spite of the enemy artillery and infantry fire.
In doing so he was severely hindered by a knee injury, but he stayed at the lead of his grenadiers and fought through with strong momentum, into position after position within the anti-tank ditch. With the occupation of the ditch SS-Sturmbannführer Wisliceny created with his advance and largest portion of the German break-in, which was the prerequisite for the further advance of the SS-Pz. Gren.Div. "Das Reich". He himself stormed from there in the afternoon and reached the next objective, despite the unfavourably wet conditions and against the hardest enemy resistance.
The significance of the attack undertaken by SS-Sturmbannfiihrer Wisliceny was that because of it the further attack by the bulk of the II. SS-Panzer-Korps could begin. The advances in this sector made possible the splintering of the strong enemy resistance.
SS-Sturmbannführer Wisliceny has both courage and go-getting, seen in his heroic mannerisms in all pushes forwards and through his stubborn defiance. In a fashion typical of his go-getting attitude this attack only brought with it light losses to his troops."
1912th Award.

Wisliceny received the Oakleaves for the following actions...
1) His successes as a Kampfgruppe leader during the battle of Normandy, where he defeated attacking US forces with his own counterattacks on 16/18.08.1944. In less than 15 days Wisliceny's forces claimed to have destroyed 35 US tanks in close combat.
2) The defense of Elbeuf, a town on the Seine. Wisliceny was able to hold this place long enough to enable three German divisions to escape to the east bank of the Seine without interference.
687th Award.

Awarded for his achievements during the Ardennes offensive and in Hungary. During the fighting in Hungary he and his Regiment especially distinguished themselves between Lakes Velence and Balaton as well as in the Leitha mountains.

151th Award.
According to several sources this awarding was not confirmed by the authorities. Number is according to the date of awarding. Confirmation is made on the basis of a statement under oath to the Ordensgemeinschaft der Ritterkreuzträger made by Generaloberst der Waffen-SS Sepp Dietrich. 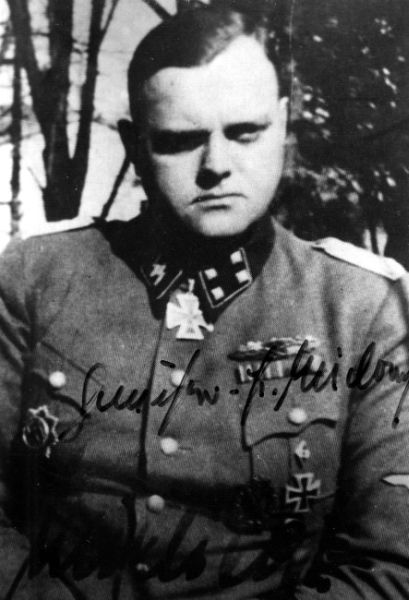