On the 26.11.1942 the SS-Kav.Rgt. 2 was dispatched to seal off the breakthrough southwest of Belyi. Upon reaching Baturino after a forced march, it received the mission to standby and await the orders of the Division. Immediately dispatched reconnaissance from here revealed that the enemy was already in Cholomedina with about 25 tanks and 300-400 men, which placed them in the rear of SS-Kav.Rgt. 1 and the deep flank of the Division as a whole. SS-Obersturmbannführer Zehender realized that this force posed a great danger to the Division itself (which was still in the process of marching to the frontline) as well as the execution of its assigned mission to seal off the breakthrough. Thus, going against his existing orders, he attacked after midnight on his own initiative with the support of 1 Batterie of light field guns and 1 Flak gun (8.8 cm). With the help of good moonlight, it was possible for this force to eject the enemy from Cholomedina after a hard fight.

On the following day the enemy launched another attack with larger numbers of forces, with the objective of recapturing Cholomedina and the road that led through the town (which was of great importance as a march and supply road for friendly motorized elements). Although his Regiment sustained heavy losses in the ensuing combat, SS-Obersturmbannführer Zehender managed to hold the attained line with his men during both days of combat. This result, largely borne of the commanders own personal intervention and inspiring bravery in the frontline, ultimately spelled the end for the enemys forward advance and their plans to roll up the friendly frontline (which would thereby expand their penetration in the frontline).

Later on the 02.12.1942, through a combination of friendly reconnaissance and prisoner statements, SS-Obersturmbannführer Zehender was able to determine the existence of an imminent enemy attack from the woods. He thus decided to launch a preemptive strike with his subordinated Schi-Bataillon on his own initiative. In the fighting which followed he bypassed the enemy flank with a Kompanie and struck the hostile supply network. This resulted in the destruction of several field kitchens, supply dumps and vehicles carrying fuel and ammunition.

The Bataillon was encircled for 24 hours, however thanks to the leadership and exemplary conduct of SS-Obersturmbannführer Zehender it managed to break out of the enemy ring.

As a result of this preemptive strike the enemys attack was called off. It had been intended that this attack would finally break through the thinly occupied friendly lines (caused by high losses) and reach the important road.

Zehender thus had a significant share in the success of the overall operation due to his Regiments capture of Cholomedina and its road as well as the attack launched behind the enemy positions. These actions, conducted on his own initiative, in turn contributed to the encirclement and destruction of those enemy forces that had broken through southwest of Belyi.

SS-Obersturmbannführer Zehender is therefore particularly worthy of being awarded the Knights Cross to the Iron Cross. He has particularly distinguished himself through his decisiveness not only here, but also in the campaigns in Poland, France, Serbia, Greece and the Soviet Union in the year 1941. Zehender already is a bearer of the German Cross in Gold, and has been wounded a total of 3 times.

Was awarded the Oakleaves for the bitter resistance his division displayed in the 52 day long siege of Budapest, during which they fought in the south part of the city. Zehender was killed shortly afterwards in the attempted breakout from the city. 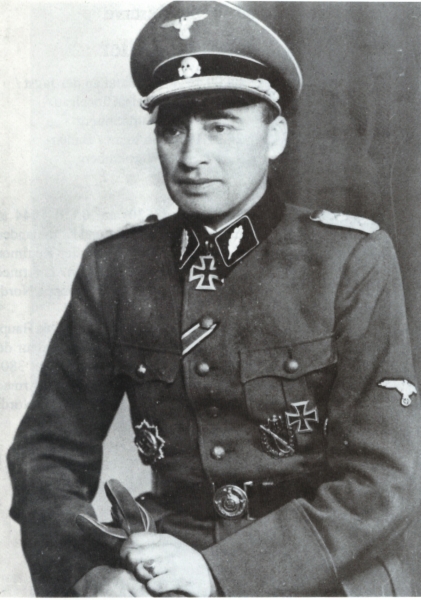