Joachim von Siegroth was reported missing in action in the Halbe Pocket, Brandenburg on May 2nd, 1945.

Awarded for his defensive success around Metz in August 1944. As the 7th US Armored Division approached Metz, Oberst Siegroth formed a Kampfgruppe consisting of 1800 soldiers from an assortment of formations but centred around a training group of officer cadets. These were formed into three battalions, and they took up positions on their old training grounds around St. Privat, Gravelotte and Manceschlucht. Fort Driant formed the southern cornerstone of the German defense.

From these positions they were able to defeat the initial US attempts to capture Metz, putting up a solid fight. For their successes here, and his role in these by his leadership, Siegroth received the Knight's Cross.

Awarded for the excellent leadership of his division during the last battles of April 1945 in the area Küstrin-Lebus-Frankfurt/Oder. On the 14.04.1945 all enemy attacks near the town of Lebus were repulsed and a small enemy penetration west of Elisenberg was eliminated, with 8 enemy tanks being destroyed.

The next day saw continued defensive battles at Elisenberg and on the road Lebus-Schönfließ. Schönfließ was lost to the enemy on 16.04. but was recaptured in a counterattack directed by Siegroth, which saw involvement of the King Tigers of 2./schwere SS-Panzer-Abteilung 502 and a battalion of the cadet regiment from the Panzer-Grenadier-Division "Kurmark". The old main battle line and embankment east of the city was also reached.

On the 17.04.1945 multiple new enemy tank-supported attacks were launched at Schönfließ, but to no avail. All local penetrations were restored via counterattacks and 25 enemy tanks were destroyed.


Recommendation was send through Oberbefehlshaber 9. Armee, General der Infanterie Busse on April 19th, 1945 and arrived at the OKH/PA/P5 on April 21st, 1945. Awarding according tot he Dönitz-Erlass. When counted this would have been the 878th Award. 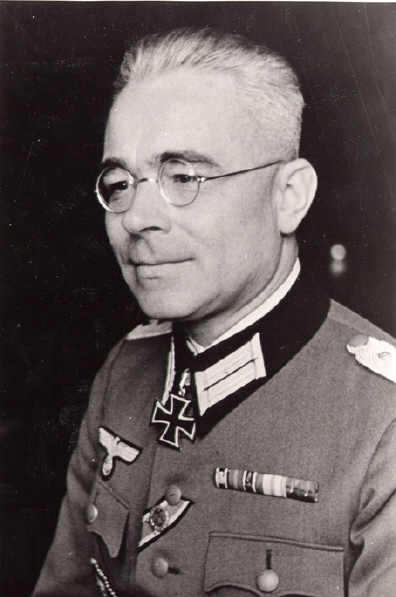