He is written in Patzwall / Scherzer as Milch, Dr., Werner

Hauptmann Milch has repeatedly distinguished himself throughout his period of attachment to Kampfgruppe Oberst Eggers via a combination of personal bravery, appropriate appraisal of tactical situations and exemplary troop leadership. He and his assault troop were decisively involved in the military success of Kampfgruppe Oberst Eggers at Flavigny.

On the evening of the 10.09.1944 the Americans launched a surprise thrust near Flavigny with their II. Battalion / 134th Infantry Regiment, and they managed to establish a bridgehead after capturing bridges across the Mosel and Ostkanal. Realizing the major threat that now presented itself for the entire Mosel front, Hauptmann Milch decided to thrust forward on his own initiative with an assault troop. Utilizing the results of reconnaissance that had been obtained in advance, he managed to get through to the bridges themselves by skillfully exploiting weak points in the American lines. By doing this he split the American forces and prevented the enemy from sending reinforcements across the bridges. Hauptmann Milch then held the position that had been reached amidst heavy infantry fire and close combat.

By doing this he paved the way for the rest of the Kampfgruppe to conduct the necessary measures for the elimination of the bridgehead. Weak forces (assembled from the Kampfgruppe staff and the staff of the Artillerie-Abteilung from Art.Rgt. 1553) launched a pincer-like counterthrust against the bridgehead, and they managed to restore contact with Hauptmann Milch and his assault troop. The bridges were destroyed, the entire enemy battalion was wiped out. Of the enemy battalion, 257 prisoners were captured and about 70-80 dead were counted east of the Mosel. The combat situation, combined with prisoner statements, suggest that the enemy also sustained high numbers of dead and wounded on the west bank. 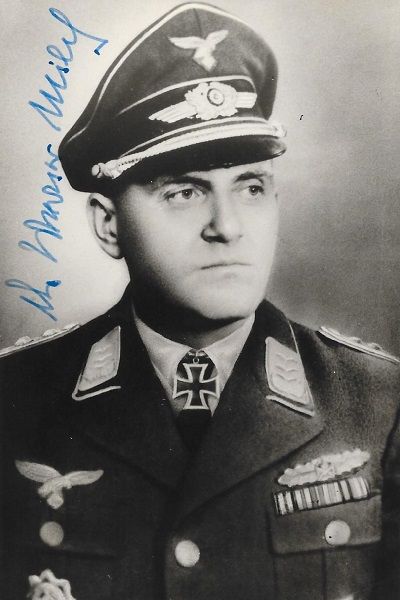