Waffen-Untersturmführer Ancans has distinguished himself through outstanding bravery and decisiveness while serving as the leader of a Nahkampfschule.

On the 23.12.1944, following a heavy artillery barrage, the Russians used strong infantry forces to achieve a deep penetration in the sector of the left neighbouring division. By doing so they threatened the left flank of our Division. The Division therefore immediately sent in hastily assembled alarm units to secure the threatened flank and prevent a rolling up of the frontline from east to west. A 6 km wide blocking front was built up and held against all the enemy attacks that were launched with both artillery and Katyusha support.

Waffen-Untersturmführer Ancans was deployed along this blocking front, specifically near the Rumbas farm with his Nahkampfschule and the trainees of a sniper course. The enemy eventually succeeded in pushing back the units on both his left and right flanks, and he himself was almost forced to withdraw and consequently concede this important cornerstone of the divisional frontline. But Waffen-Untersturmführer Ancans recognized the danger this would pose for the entire front, and in this critical situation he resolved to hold his strongpoint at the Rumbas farm under any circumstances, and to the last man if necessary. Enemy penetrations were eliminated under his leadership and in conjunction with the 8./SS-A.R. 19 (which had gone over to close combat).

This strongpoint near the Rumbas farm came to constitute the focal point of the entire battle. The enemy had to capture this cornerstone if they were to have any chance at successfully thrusting into the flank of the Division. Their success here would have led to the rolling up of the Divisions frontline.

However they failed to eliminate the strongpoint despite launching 4 attacks with strong artillery, tank and aircraft support. Here Waffen-Untersturmführer Ancans was the soul of the entire defensive battle. He was a shining example for his men, who were likewise inspired to incomparable deeds of heroism. 6 enemy tanks were destroyed in this sector with close combat weapons. Ancans personally knocked out 1 of these. Another 3 were knocked out with direct fire from the 8./SS-A.R. 19. About 200 enemy dead were counted in front of the strongpoint.

Waffen-Untersturmführer Ancans decisiveness brought about a particularly extraordinary victory here. He provided the entire Division with a firm bulwark, thereby enabling it to carry out the withdrawal movement back to the artillery covering position that had been planned for the evening.

Waffen-Untersturmführer Ancans was awarded the Iron Cross First Class on the 27.12.1944 in recognition of his actions here, however this hardly suffices in light of his outstanding merit and bravery. Even when held to a very high standard, I nonetheless view Ancans as particularly worthy of being awarded the Knights Cross to the Iron Cross.

During this heavy combat Waffen-Untersturmführer Ancans was wounded for the sixth time. 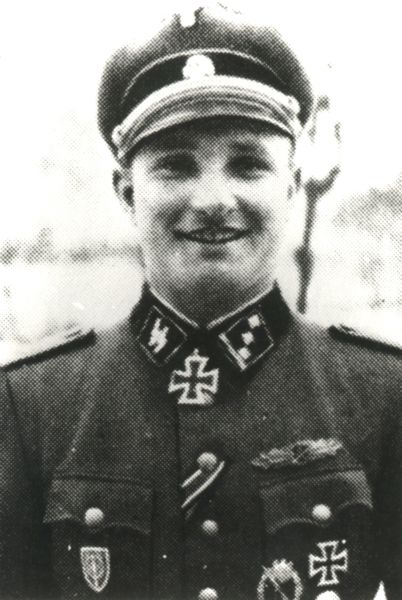