Awarded in the summer of 1943. Exact date unknown.

Awarded in the summer of 1943. Exact date unknown.

During this time SS-Obersturmführer Armberger was a shining example for officers, NCOs and men alike; he received 9 wounds and was named in the Honour Roll Clasp of the German Army on the 17.06.1944 for his outstanding bravery during the defense of Stanislau.

SS-Obersturmführer Armberger once again effected a disproportionate influence on the combat during the fighting along the Invasion front in the summer of 1944.

English armoured forces launched a surprise thrust along the CarougesRanes road on the 13.08.1944, and at around 15:00 they occupied the village of le Menil-Angot. With this the enemy succeeded in blocking the retreat road to the north for those friendly forces that had gathered in the ChampJouide Bois area. The enemy was reinforced with additional tanks from the area east of le Menil-Angot and St. Martin, and after this they sought to elongate their blocking line to the east and west.

With this situation in mind, SS-Obersturmführer Armberger received a mission from the commander of the II./SS-Panzer-Regiment 1 LSSAH. His task was to reconnoiter the enemy force in the le Menil-Angot area with his 5 remaining operational Panzer IVs and 2 armoured cars from the Heer.

SS-Obersturmführer Armberger set out in a swift advance and succeeded in clearing the enemy infantry groups that were occupying the CarrougesRanes road. He reached the southern edge of le Menil-Angot, and here his armoured group became engaged in a heavy firefight with the enemy security forces. The enemy furthermore sent in 8 fighter-bombers, and their bombing/strafing attacks rendered impossible any further advance by our armoured spearhead without the latter sustaining heavy losses. New enemy forces came into action at the same time as the fighter-bombers, and SS-Obersturmführer Armbergers armoured group came under attack from enemy tanks and anti-tank guns. 2 Panzer IVs were lost in the firefight.

SS-Obersturmführer Armberger thereupon decided to break off the battle. He would leave his remaining Panzers to secure the road fork south of le Menil-Angot while he continued his reconnaissance mission on foot with a few comrades.

In order to fulfill this intent, he and his Kompanie squad leader rounded up some of his crew and went forwards against the enemy security position. His objective was to eliminate the enemy tanks on the village edge with close combat weapons and thereby enable his Panzers to launch a renewed attempt against the village.

Despite several unsuccessful attempts he showed great perseverance under the very difficult conditions. He eventually succeeded in working his way into combat range, and from here he personally destroyed 4 enemy tanks in quick succession with Panzerfausts. Throughout this time he put his own life at great risk in order to successfully carry out his ordered mission under any circumstances.

The enemy took heed of his losses, and after this they pulled back their position to a point about 300 metres deeper into the village. From there they were unable to use their weaponry to dominate the road that led southwards from le Menil-Angot. Our own forces were thus able to carry out their ordered withdrawal movements without interference.

The preconditions for this successful maneuver were established by the bold actions and singularly brave initiative of SS-Obersturmführer Armberger.

SS-Obersturmführer Armberger also distinguished himself on multiple other occasions during the Divisions hard battles along the Invasion front. On the 20.08.1944, following his 9th wound, he was struck by a direct artillery hit during the breakthrough battles south of Falaise and died a heros death. Here as well he led at the point of his Kompanie against the far superior enemy. This fate overtook him after he had left his vehicle in order to conduct a foot reconnaissance for the operation of his Kompanie.

His death signalled the end of a heroic soldierly life that had served as a model of bravery and courage for all members of the Regiment.

I ask that SS-Obersturmführer Armberger be awarded the Knights Cross to the Iron Cross in light of his outstanding achievements throughout all the campaigns of this war. 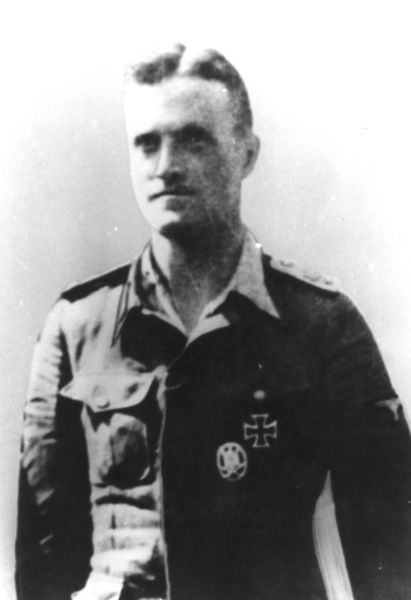