The following divisional order of the day (dated 16.02.1945) describes why Audenrieth was awarded the Knights Cross

On the 10.02.1945 the Führer awarded the Knights Cross of the Iron Cross to Stabsgefreiter (by now promoted to Oberjäger) Georg Audenrieth of the 3./Geb.Jäg.Rgt. 99.

Audenrieth particularly distinguished himself through particular bravery during the heavy defensive combat at Grabovo (Croatia) on the 25.12.1944.

During the early morning of this day, the first day of Christmas, the Bulgarians attacked through the thick mist following an hour-long artillery barrage. Along with the support of elite communist troops, they succeeded in achieving a penetration. Strong enemy forces swiftly dug in behind our frontline in order to consolidate their control over the village and the nearby friendly fieldworks. The situation appeared hopeless.

Totally alone, and without any contact with his superiors, Audenrieth commenced a counterthrust with just 2 men. His aim was to crush the much larger enemy force.

Under fire from numerous enemy weapons, he managed to throw back the foe in close combat. He succeeded in once again restoring contact with the left neighbour.

It was Audenrieths bravery and decisiveness which ensured the elimination of the enemy penetration here and the holding of the defensive front in this sector.

I congratulate both Oberjäger Audenrieth and the entire Regiment in light of this high honour. On behalf of the whole Division, I also give him my thanks for the outstanding merit he has wrought on the battlefield. 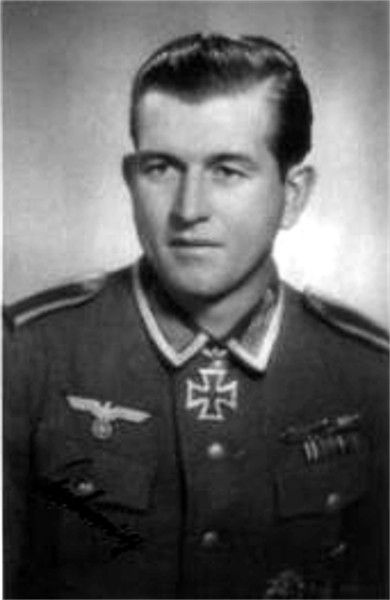