Was promoted to SS-Sturmbannführer on January 30th 1945.

On the 16.09.1944, during an attack by Kampfgruppe Prager, a Kompanie of the I./8 was sent on a flanking maneuver to the right in order to envelop the enemys toughly defended river position south of Sag. As the attacks from the front and left offered no promises for success, and because the terrain on the right was favourable for an attack, an additional Kompanie from the I./8 was deployed on the right to engage the enemy in their flank and rear. However the attack still only made slow initial progress in the face of tough enemy resistance. The attack was only reenergized after SS-Haupsturmführer Auer had personally taken over the main attacking Kompanie on the right. The Kompanie thrust into the flank and rear of the strongly fortified enemy river position and rolled it up from the flank.

With this the enemys toughly defended Timisul position, held by about 7 companies, was captured. This success was first and foremost due to the personal boldness, bravery and prudence of SS-Hauptsturmführer Auer.

On the 17.09.1944 SS-Hauptsturmführer Auer and his Bataillon thrust forwards in the area east of Temeschburg while once again under the command of Kampfgruppe Prager. This Kampfgruppe had the task of stop the enemy from linking up along the line TemeschburgLugoj. SS-Hauptsturmführer took up positions in the east with elements of his Bataillon to provide flank protection for the Kampfgruppe. However, following a good initial success, the enemy succeeded in using their superior forces (supported by tanks and artillery) to cut off Auers force from the rest of the Kampfgruppe. But Auer and his men was in turn able to withstand the enemy onslaught with exemplary bravery and perseverance. Auer went on to conduct a skillful breakout back to the Kampfgruppe during the night with only minimal friendly losses.

On the 24.09.1944 Auer and his Bataillon were employed on the left wing of the friendly attacking group in order to guard its open left flank. To this end the Bataillon dispatched elements to attack Sandra (30 km northwest of Temeschburg), however the attack bogged down west of Sandra in the face of overwhelming enemy forces. In response SS-Hauptsturmführer Auer gathered up a Kompanie and the reserve Zug on his own initiative, and with this force he led a thrust into the enemy flank and captured Sandra. The resolution and personal bravery of this Bataillon commander was decisive. He and his weak forces then held Sandra against all enemy attacks despite becoming temporarily encircled.

By doing this Auer facilitated the success of our own thrust to the north along the route EssagPeriam, which itself led to the cutting off of those Russian forces in the area southwest of the Maros (southeast of Temeschburg). Auer thus decisively contributed to the defeat of the Russians thrust from the southeast. 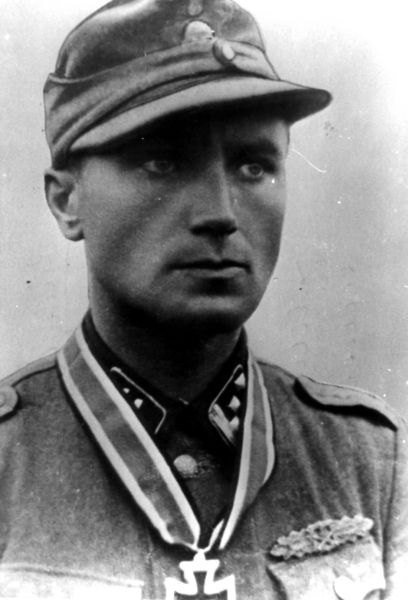