Karl Baacke joined the I.R. in 1924. 16 a. On April 1, 1934 he was promoted to lieutenant and from 1936 led the I.R. 37. In 1937 he took over as captain of the 6. / I.R. 37. In May 1940 he was transferred to the Führerreserve of the OKH and then the 72nd I.D. assigned. He became head of the advance division of the division, which he also led in the Balkans. With the department he succeeded in taking the village of Molos and thus opening the way to Athens, for which he was awarded the Knight's Cross on June 30, 1941. He was
Commander of the G.R. 226, which he led in the battles for Orel, Gomel and southeast of Kiev. On the way to the front, Baacke was ordered to set up a regiment from vacationers to help the German troops trapped near Kanev-Korsun, including his G.R. 226, to be horrified. After hard fighting, the regiment was encircled at Orinin itself. When the regiment broke out, Lieutenant Colonel Baacke fell with the rearguard of his regiment.

"The captain of an infantry regiment Baacke, distinguished himself in the battles at Thermopylae. He deployed a maneuverable detachment and opened a vital narrow passage in a tough overnight battles against a well prepared enemy position and captured 24 guns."

Hauptmann Baacke has already previously distinguished himself during the fighting around Mount Olympus through his extraordinary readiness for duty and prudent leadership of the Vorausabteilung 72. During the battle for Thermopylae he attacked the strong English opponent via a night attack launched on his own initiative. In the process he demonstrated great personal bravery and achieved a decisive victory for the continued forward advance of the 6. Gebirgs-Division.

The following press article (dated 16.12.1943) describes why Baacke was awarded the Oakleaves

As the battle of the moselländischen 72. Infanterie-Division (named in the Wehrmachtbericht of the 06.12.1943) in Cherkassy came to a head, and the city itself was temporarily encircled, Oberstleutnant Baacke broke the Soviets encirclement ring and thereby enabled both the evacuation of the wounded and the influx of important supply goods. On the next day, once again surrounded on all sides, he broke the attack of strong infantry and tank forces and thereafter restored contact with the outside by storming a particularly heavily fortified strongpoint of the enemy. Oberstleutnant Baacke led his Grenadier-Regiment from the foremost line during all these battles, and throughout this time he inspired his Grenadiers to high achievements despite their having been engaged in continuous combat for 14 days.

"At Sevastopol, the commander of a bicycle department, Major Baacke his squadron leader Lieutenant Kupsch and the head of a pioneer company Lieutenant Stier, have distinguished themselves by exceptional bravery." 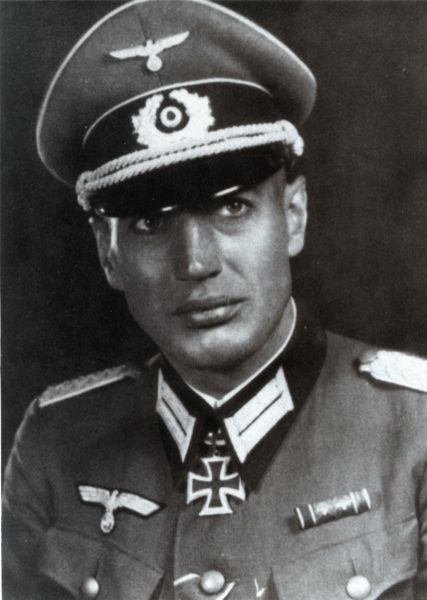