Oberleutnant Baumgarten especially distinguished himself by maintaining a firm defense of Strongpoint Panskoj in the face of a tremendous enemy superiority (the enemy infantry strength was estimated to be at least 3 battalions strong). By doing so he enabled the friendly units to the north of his position to rebuild their frontline. He simultaneously drew significant enemy forces to his own position, with the result that the enemy attacks over the course of the day in the neighbouring sectors slackened to such a degree that it was easy to fight them off. The defensive victory that he achieved here significantly improved the overall combat situation of both the Regiment and the adjacent neighbouring division to the north.

The following divisional order of the day (dated 01.03.1943) describes why Baumgarten-Crusius was awarded the Oakleaves to his Knights Cross

On the 27.02.1943 the Führer awarded the Oakleaves to Knights Cross Holder and Oberleutnant Werner Baumgarten-Crusius, commander of the I./Inf.Rgt. 156 (mot). He is the 199th soldier of the German Wehrmacht to be so honoured.

Oberleutnant Baumgarten-Crusius and his I./Inf.Rgt. 156 (mot) had the lions share in the destruction of the Russian 4th Guards Tank Corps in the Fedorenko gorge on the 20.02.1943. Prior to this, on the 18.02.1943, the Bataillon had closed the breakthrough position near Stepanowskij following a bold attack in conjunction with the Panzer-Abteilung 116. This attack smashed the lead units of the 33rd rifle division (which were following the path of the broken-through Russian Tank Corps) and forced them into a disorderly retreat towards the east. With this the 4th Guards Tank Corps was cut off from its rearward connections. On the following day the Bataillon repulsed all enemy attempts to reopen the gap at Stepanowskij from the East.

On the night of the 19./20.02.1943 the 4th Guards Tank Corps tried to break out eastwards through the Fedorenko gorge. At the same time the enemy launched strong attacks against Stepanowskij from the east in order to facilitate this breakout. Oberleutnant Baumgarten-Crusius waited with nerves of steel for the enemys desperate attempt to force a breakout by simultaneously attacking him in the front and rear. The enemy struck from the west at around 05:00 with strong tank forces and 200 trucks. In response Oberleutnant Baumgarten-Crusius met them head on with his only friendly Panzer support, bringing this attacking wave to a halt while simultaneously repulsing all attacks from the east. Then, as the enemy in the Fedorenko gorge were being plastered with fire from all sides, he initiated a decisive double-pincer attack that led to the total destruction of the Russian Guards Tank Corps. With this Oberleutnant Baumgarten-Crusius and his I./Inf.Rgt. 156 (mot) brought about a feat-of-arms worthy of the highest veneration.

The Division is enormously proud of its victorious comrades in the I./156, which itself has been very much honoured by the bestowal of this high award upon its commander.

Three Hurras for the victors of Stepanowskij, the destroyers of the Russian 4th Guards Tank Corps! 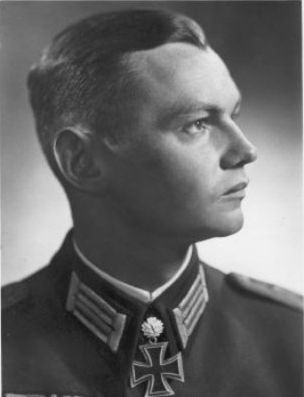