One of 40 soldiers cited in the Wehrmachtbericht or Armed Forces Communiqué but not named in the newly established Honor Roll of the German Army (EBS) due to a change in award policy made effective 8 Aug 1941 (and beginning with award # 74). The soldiers in question, did, however, receive the Commendation Certificate (AU).

Oberleutnant Buchterkirch very favourably influenced the course of the attack in his sector through his brave actions. He personally destroyed 6 enemy tanks with his Panzer (which later burned out due to a direct hit), and his Zug as a whole destroyed 18 enemy tanks.

The following excerpt from a Propaganda-Kompanie report (dated 10.01.1942) further details why Buchterkirch received the high award

On the 15.05.1940 Buchterkirch knocked out 6 enemy tanks with his own Panzer near Ernage, and through his intervention here a Moroccan counterattack was thrown back. In the subsequent pursuit a breakthrough was forced at this location towards the Dyle position. His own Panzer was knocked out during this fighting and burned out. Oberleutnant Buchterkirch continued to fight on foot, and he established contact with the riflemen of the Schützen-Regiment of his Brandenburgischen Panzer-Division. 6 days later, on the 21.05.1940, Buchterkirch succeeded in extracting friendly supply elements from strong enemy bunker fire. On the 13.06.1940 he manage to seize the Seine crossings near Pont sur Seine through his determined and swift acton. 3 days after this success he destroyed 5 enemy tanks in the forest before Saulieu and enabled the riflemen of his Panzer-Division to capture strong enemy infantry forces.

Awarded for his actions during the opening stages of Operation Barbarossa. On the 23.06.1941 he and his Kompanie destroyed 12 enemy tanks near Buchowiecze in just a few minutes. On the 24.06.1941 Buchterkirch succeeded in creating a bridgehead over the Szczara river near Minicze, and on the following day he conducted a ruthless pursuit battle as far as Filipowicze. He then launched a thrust on the 07.07.1941 that made it as far as the heights southeast of Luki.

The following excerpt from a Propaganda-Kompanie report (dated 10.01.1942) further details why Buchterkirch received the high award 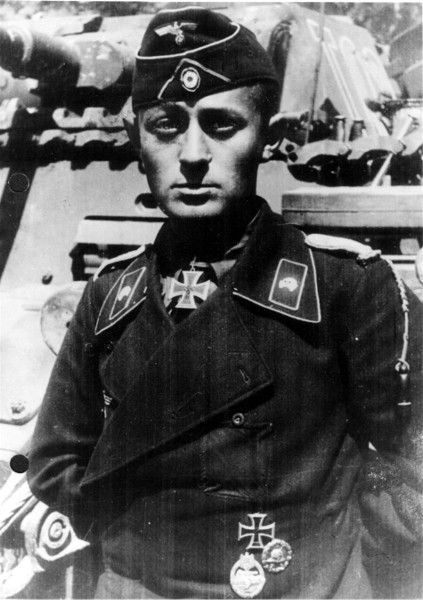