On March 8th, 1944, Oberst Büsing was fatally injured by enemy artillery fire near Losovatka. He died the same day from his injuries in the medical clearing station at Rovnoye, Soviet Union. He was promoted pothumous to the rank of Generalmajor from March 1st onwards.

The following article from the Oppelner Zeitung (dated 02.12.1942) describes why Büsing was awarded the Knights Cross

This distinguished Panzer leader (who has proven himself in many battles since the start of the war) achieved battle-deciding victories in the area north of Orel, particularly in the middle of August 1942. During this time he received a mission of reaching a forest edge on the far side of the Shisdra river with his Panzers. To this end Oberstleutnant Büsing forded the river at night despite the great difficulties involved and then thrust forwards along the very marshy roads through the enemy occupied forest. When he was orientating himself as to the situation he was informed that heavy enemy traffic was travelling on a major road further forwards. He immediately resolved to attack and interdict this traffic without waiting for all the fighting vehicles of his unit.

After eliminating four well-camouflaged enemy tanks the Regiment encountered strong direct artillery fire, which meant that the motorcycle troops mounted on the Panzers had to be left behind. Heedless of this fire, Oberstleutnant Büsing left his command vehicle in order to locate the Soviet batteries. After he had confirmed their position he ordered the attack to carry on, all while intending to simultaneously capture a heavily occupied enemy hill that dominated the terrain through which the attack was to be conducted. Driving amongst the lead fighting vehicles, Oberstleutnant Büsing thrust into the middle of the 4 firing and desperately defending batteries. These were shot up and overrun in a ruthless assault.

However as this engagement was being fought a force of 35 Soviet tanks approached the commanding hill. Driving swiftly, they sought to prevent Büsings Regiment from continuing its advance. The Oberstleutnant immediately perceived that everything depended on capturing the hill before the enemy reached it, and so he swiftly decided to turn against the newly arrived enemy. 16 enemy tanks were destroyed in the furious tank battle that erupted, and Oberstleutnant Büsing was ultimately able to take the hill firmly under his control. By doing so he had broken through the well fortified defensive system of the Soviets at a decisive point. This great tactical victory was of great importance for the continued operations of his Panzer-Korps. 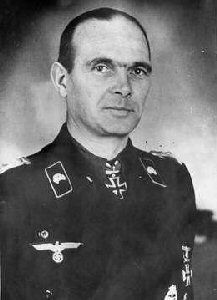