In the continuation of the attack against Shanderovka - stubbornly defended by the Soviets - on the night of 12-13.02.1944 SS-Obersturmführer Meyer, as Kompanie leader of the 1./SS-Pz.Gren.Rgt. Germania, particularly distinguished himself by outstanding bravery in front of the enemy through rapid and independent decisions. The seizure of Shanderovka was of crucial importance for the breakout from the Cherkassy pocket. This had been recognized by the opponent and they defended the location with dogged tenacity and well developed positions with built in flamethrowers.

In the first night attack on the 11-12.02.1944, the battalion was successful in penetrating the enemy positions in the south and on 12.02., surprised them and rolled up this southern part of Shanderovka, taking possession of it. A continuation of the attack during 12.02. and full possession of Shanderovka was not possible due to tenacious enemy resistance. Thus, the start of a renewed attack was set for 22:15 hours.

Meyer received the order to lead his Kompanie in an advance along along the narrow road following 2. Kompanie. After 03:00, the attack of the 2. Kompanie came to a halt due to machine gun and anti-tank fire.

Correctly recognizing this difficult situation, and clearly aware of the importance of the capture of this place, Meyer made the decision to immediately attack this point with his Kompanie.

Using the protection of a ditch, he came in from the west and managed to surprise the enemy, engaging them in their flank. With only a few men Meyer broke into the positions of the Soviets with reckless regard for his own safety and, in that position, put an anti-tank gun out of action with 2 hand grenades. Following this spirited example he dashed forward with his men while crying a loud "Hurra!". Moving along the road from house to house they conducted hard and dogged close combat, in which Meyer was always found providing the crucial decisions, and they were able to eject the Soviet forces and provide relief for the 2. Kompanie.

Meyer continued the attack and with his Kompanie captured the following enemy materiel:

From a house that later turned out to be the enemy's regimental command post resistance was particularly obstinate. With his Kompanie troops and some men from 1st Platoon, Meyer penetrated this house and took three officers prisoner. The regimental commander escaped capture through suicide.

The resolute and reckless actions of Meyer contributed significantly to the seizure of this crucial place. From here the combined trapped forces of the XI. and XXXXII. Armee Korps made their escape from the Cherkassy pocket on 16.02.1944.

In this war Meyer has repeatedly shown himself as an excellent SS leader. He has already been awarded the Iron Cross First Class in the western campaign as one of the first men of the regiment to be so honoured. He is a holder of the German Cross in Gold, the Close Combat Clasp in Silver, and has been wounded four times. SS-Obersturmführer Meyer is worthy to be awarded the Knight's Cross of the Iron Cross." 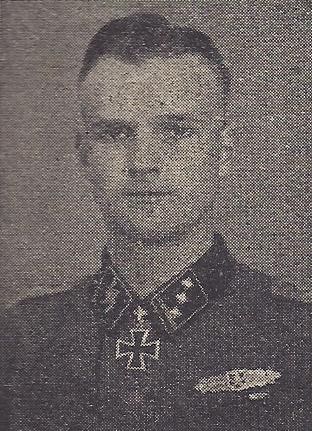