"On 7 January 1945, near Tillet, Belgium, his company attacked German troops on rising ground. Intense hostile machinegun fire pinned down and threatened to annihilate the American unit in an exposed position where frozen ground made it impossible to dig in for protection. Heavy mortar and artillery fire from enemy batteries was added to the storm of destruction falling on the Americans. Realizing that the machinegun must be silenced at all costs, S/Sgt. Shoup, armed with an automatic rifle, crawled to within 75 yards of the enemy emplacement. He found that his fire was ineffective from this position, and completely disregarding his own safety, stood up and grimly strode ahead into the murderous stream of bullets, firing his low-held weapon as he went. He was hit several times and finally was knocked to the ground but he struggled to his feet and staggered forward until close enough to hurl a grenade, wiping out the enemy machinegun nest with his dying action. By his heroism, fearless determination, and supreme sacrifice, S/Sgt. Shoup eliminated a hostile weapon which threatened to destroy his company and turned a desperate situation into victory."
Awarded posthumously 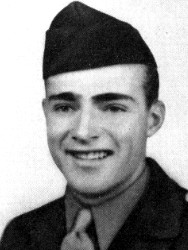