Citation:
First Lieutenant James Megellas, Infantry, 82nd Airborne Division, United States Army. For extraordinary heroism in connection with military operations against an armed enemy as a Platoon Leader, Company H, 504th Parachute Infantry Regiment, on 30 September 1944, in Holland. First Lieutenant Megellas led his platoon on a combat patrol to secure information and prisoners. Arriving at the enemy observation post, he crawled forward alone and killed two outpost guards and the crew of a machine gun nest. He brought forward his patrol, attacked the main enemy defenses and singlehandedly secured three prisoners and killed two more. Two blockhouses were then attacked and destroyed. The aggressiveness of this patrol action thoroughly demoralized the enemy in the sector. His mission completed, First Lieutenant Megellas withdrew his platoon through the enemy lines and under mortar fire. He personally carried a wounded man while firing his Thompson Submachine gun with one hand. The extraordinary heroism and brilliant leadership displayed by First Lieutenant Megellas enabled his patrol to inflict disproportionate casualties on the enemy, secure vital information and force the Germans to abandon their planned offensive in the area. His conduct was an inspiration to his men and a credit to the United States Airborne Forces.

For action performed on 28 January 1945, at Herresbach (municipality Amel)/Province of Liège, Belgium.
This award was obtained in the form of an Oak Leave to be attached on the ribbon of the first award. Citation unavailable.

For wounds received in action in Italy.
This award was obtained in the form of an Oak Leave to be attached on the ribbon of the first award. 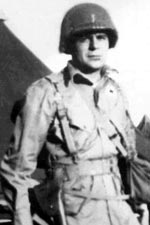 Were pausing tonight to mourn the loss but celebrate the life of WWII hero U.S. Army Lieutenant Colonel (Ret.) James Maggie Megellas. He passed away peacefully this evening at age 103.