Paul Hausser reached the rank of Generalleutnant in the Reichswehr before joined the SS. He led his armies in the Battle of Kharkov, Kursk and Normandy. Hausser ended his war career in the rank of SS-Oberst-Gruppenführer und Generaloberst der Waffen-SS.

Hausser has already proven himself as an outstanding leader during the Western campaign, always taking command of the situation at the most dangerous of positions. His great confidence, calm, and mastery of the most difficult situations set him apart from others.

His combat leadership brought about decisive results during the fighting between the Beresina and the Dnieper. After crossing the Beresina the SS Div. Reich received the order to attack on the left wing of the XXXXVI. Pz.Korps in orderly to relieve the hard-pressed 10. Pz.Div. With this unit it would then launch a swift forward advance toward the Dnieper via Belynitschi and School. In order to fix and destroy the enemy (who had skillfully pulled back to the east), on the evening of the 07.07.1941 the divisional commander decided to dispatch the reinforced Kradschützen-Bataillon forward in an advance against Esmon. They were to place themselves before the retreating enemy in the Oslik passage and block the route through it. The bulk of the division would launch a frontal attack.

The enemy offered heavy resistance against the reinforced SS-Regiment Der Führer at Somry. The divisional commander rushed to the forward Bataillonen in order to obtain a personal glimpse of the enemy strength and dispositions. As the attack moved through the village he was lightly wounded by a shell splinter from a shell that landed a few meters away from him, however he stayed in command of the Division. By bringing down the bulk of the available artillery the divisional commander succeeded in getting the attack going again despite tough enemy resistance in forested terrain that had limited visibility. The enemy force was the 100th (Moscow) division, one of the best Russian divisions. The skillful and active leadership of the divisional commander succeeded in throwing back and largely annihilating the enemy that were attacking from all sides in the extremely difficult terrain.

The thrust from the Beresina to the Dnieper, one that brought with it the destruction of some of the best Russian troops, was chiefly responsible for the enemys inability to organize further resistance behind the Dnieper. As such the swift crossing over the Dnieper by the Korps and the early, deep pursuit thrust of the 10. Pz.Div. was enabled. This was of great importance for the course of friendly operations.

During the Western campaign the SS Div. Reich, under the command of Gruppenführer Hausser, participated decisively in the following actions:

A) All on its own, the Division captured the island of Walcheren in a battle against Dutch and French troops that lasted for three days. In doing so the early capitulation of the Fortress Antwerp was forced, a fortress that had been flanked by the capture of Vlissingen and was therefore unusable to the enemy as a harbour.

B) During the fighting in Flanders the Division fought under the control of Panzergruppe Kleist in the Nieppe forest against English forces. Though these fought bravely, the Division was ultimately able to capture the forest after a 4-day battle and in doing so had a major share in the encirclement of the English-French troops in Flanders.

C) During the thrust of the armoured troops to the Langres Plateau, the Division had the task of securing the deep left flank of Gruppe Kleist. At the upper Seine river it thrusted against the French troops from the Maginot Line that were fleeing to the southeast, attacking these in the Chatillon area and fully eliminating them. In just one day the Division captured 20000 prisoners, 14 batteries and countless amounts of materiel.

Received for sustaining wounds on October 14th 1941 where he lost sight in his left eye and sustained jaw injuries. At the moment Hausser received this decoration he was Commander of the II.SS-Panzerkorps.

I would like to recommend the Oakleaves to the Knights Cross for the commanding general of the II. SS-Panzer-Korps, SS-Obergruppenführer and General der Waffen-SS Hausser, for his multiple acts of merit during his leadership of the Korps during the offensive operation north of Belgorod (Zitadelle).

On the first attack day (the 05.07.1943) the attack of the Leibstandarte was held up around midday by the overwhelming artillery fire from the heights near Shurawliny and south of Olchowka. The commanding general, present at the front, recognized the crisis and immediately initiated all the appropriate countermeasures. Almost all the Korps artillery was used for the suppression of the enemy batteries, as was the whole VIII. Fliegerkorps. In the knowledge that now the attack of the Division Das Reich would bring about the necessary relief, he rushed further forwards and arranged the mission for the Panzers of this Division. He also ordered an immediate attack by the Division Totenkopf, which in the original attack plan was only to move out later to the right and rear of the Das Reich Division. The success was resounding. The attack of the Leibstandarte through the deep enemy fortifications once again came into motion, the powerful strongpoint at Shurawliny was stormed by a double-pincer attack, and by the evening the Korps stood just before the second enemy defensive line and began to clean up the enemy units in the right flank of the Armee.

On the second attack day the II. SS-Panzer-Korps had broken through the second enemy position when strong tank forces were reported as driving through Prokhorovka. The commanding general, leading from the front, recognized the favourability of the situation. Although it was clear that the XXXXVIII. Panzer-Korps was still involved in hard combat within the second defensive line northwest of Olchowka, and that this would mean that a further advance by the II. SS-Panzer-Korps would have an open flank, the commanding general decided to reroute the bulk of the Korps towards Prokhorovka in order to halt the enemy there as far away from the battlefield as possible. After leaving behind security elements at Pokrowka he personally led the Panzers of the SS-Division Das Reich and the SS-Leibstandarte forwards along the LutschkiProkhorovka road. In a heavy tank battle they succeeded in pushing back the enemy 2nd and 5th Guards Tank Corps back to Prokhorovka with heavy losses and capturing the heights at Teterewino. Through this it was possible on the third day to reorient the Panzers once again towards the west and take the Soviet 3rd Mechanized Corps (opposite the XXXXVIII. Panzer-Korps) in the rear.

On this day, the 07.07.1943, a heavy crisis developed along the right flank near Teterewino when the forces that had been deployed for security there (from the Division Das Reich) were attacked from the east by the newly brought up 6th Tank Corps and the remnants of the 2nd and 5th Guards Tank Corps. The enemy broke through the infantry of the Division Das Reich in multiple places to a great depth with numerous tanks. The commanding general, who moved swiftly to the threatened area, held firm against the developing enemy tank thrust towards the west. And thanks to the presence of the commander, which inspired the SS-Panzergrenadiers at their posts, it was possible to deal with the broken-in enemy tanks in close combat and prevent the breakthrough.

I hardly ever met Obergruppenführer Hausser at the forward corps command post during the 14-day operation, instead he was always forward with his divisions or the troops themselves. Despite being hindered by a severe wound he had sustained previously, he tirelessly led from the front the whole day long. His troops found new motivation and energy from his continual presence, courage and humour even in the hardest of situations, and even in spite of this Hausser maintained a firm grip over the command and control of the Korps.

Just as in the offensive against Kharkov earlier this year, SS-Obergruppenführer Hausser showed great foresight in recognizing the overall operation situation, while also executing his combat operations with bravery and energy. Time and again he has proven himself to be an unusually capable commanding general.

Awarded for his leadership achievements while in command of the 7. Armee during the battle of Normandy. 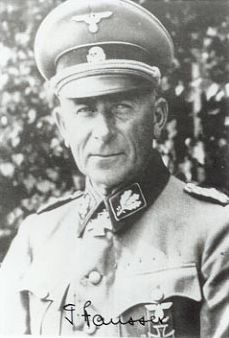 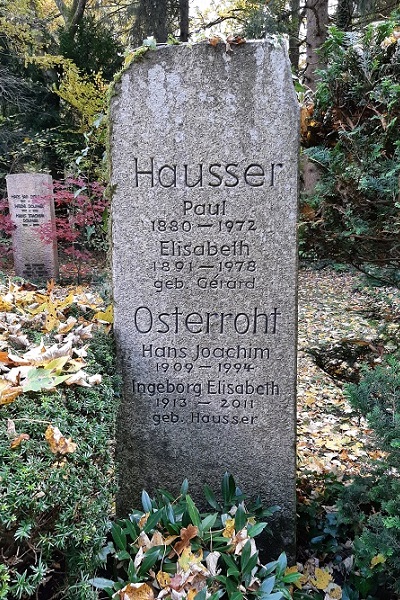 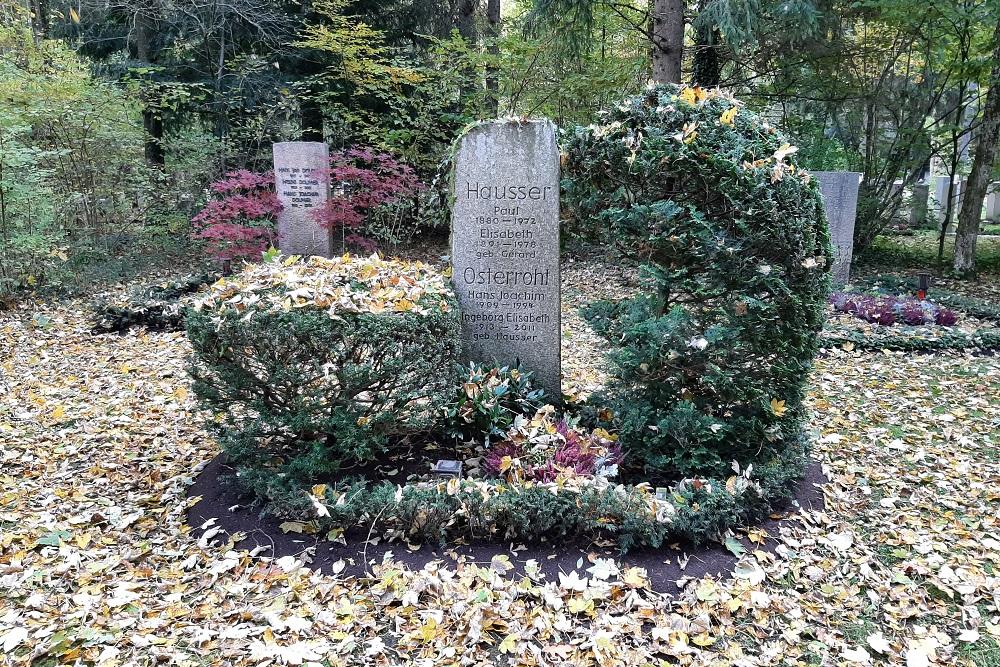