Reinier Emil Jessurun was born on 15th December 1904 in Haarlem. He served as reserve-waarnemer with the Militaire Luchtvaart of the Koninklijk Nederlands-indisch Leger. After the Japanese forces occupied the Dutch East Indies he went to Australia and there took part in operations of the No. 18 (N.E.I.) Squadron.

Reinier Jessurun stayed serving in the Dutch East Indies after the war and was killed in an aircrash at Kroja, Indonesia on 14th May 1949. In his commemmoration the Dutch Royal Air force named a military complex in Soestduinen near the airbase Soesterberg the Jesserunkamp.

Citation:
"As navigator-bombardier of the command aircraft in a patrol heavy bombers during several following days in a tactfull way having maked his choices of several enemy shipping targets and by able conduct having inflicted heavy losses to the enemy in spite of resistence."

Governemental decree No. 1z dated 24th February 1942.
Awarded with the Bronze Cross.
Later revoced and replacced by the Bronze Lion.

Citation:
"By taking part in many operational sorties, among several successfull ones in the first quater of 1943, having hit the enemy severely; also having been an excellent example for the personnel of the under very difficult circumstances operation, newly formed bomber unit of the Royal Dutch East-Indian Army."

Replacement for the Bronze Cross with Eervolle Vermelding; later revoced with awarding of the Militaire Willems Orde.

Citation:
"Having distinguished himself in battle by excellent deeds of courage, wisdom and fealty, by successfully accomplishing, immediately after his recovery from very serious wounds resulting from a nigh-flight to Ambon on May 28, 1943, in the period from September 1943 until April 1945, being assigned to the 18th Squadron and the American 13th Air Force subsequently, numerous dangerous and important bombing missions and ground reconnaissances in the south west Pacific, thereby finding himself, as a Dutch Officer Observer, many times entrusted with the operational leadership of heavy formations of allied air planes, with great skill, pushing power and courage he has given to the allied powers an indispensable contribution to the neutralisation of some 20 enemy airbases on Halmaheira, in Minahasa, Kendari and on the Boeroe-Ceram Group and, due to this neutralisation, to the repressing of the extremely disturbing actions of the enemy, operating from these bases. Against Morotai, after having independently projected and by very dangerous offensive ground and air reconnaissances, prepared for the plan of action. Finally he has actively taken part in several missions to the enemy occupied Philippines and against Puerte Princessa, Zamboanga, Cebu, Jolo and Davao." 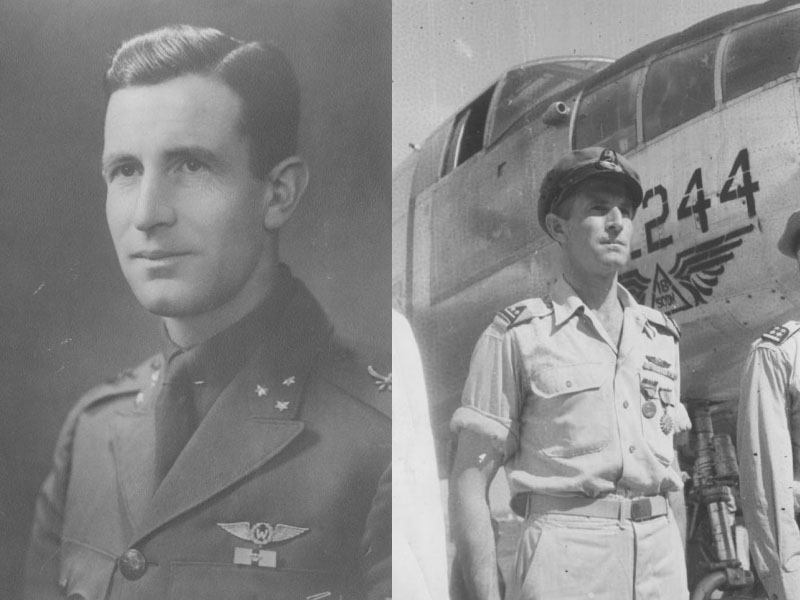